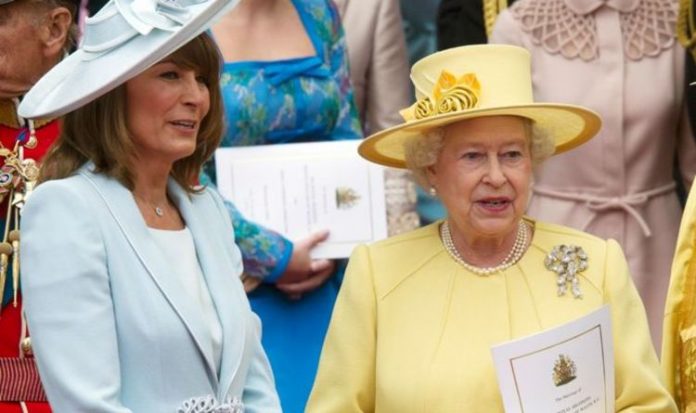 Carole Middleton was the victim of a royal protocol blunder when she and her husband Michael met the Queen for the first time, according to royal experts. Kate, the Duchess of Cambridge’s parents had been personally invited by the monarch to an intimate lunch at Windsor Castle. Royal commentators spoke to Channel 5 documentary, ‘When the Middletons Met the Monarchy’, about what happened in this momentous occasion for the Middletons.

Daily Mail Editor-at-Large Richard Kay told viewers: “The purpose of the meeting was to put them at their ease.

“But it must be quite an intimidating moment for Carole Middleton, whose great-great-grandfather had been a coal miner in Durham.”

Royal author Tom Quinn gave insight: “Carole apparently said ‘Pleased to meet you’ when she’d been told to say ‘How do you do?’

“In the tension of the moment, you forget.”

“It went on for an hour and a half, which is quite long actually by Queen standards.

“It must have been quite awesome to be going through those doors of the ancient medieval castle.

“These huge buildings that you know are steeped in history, where terribly important people lived.”

Mr Harrold continued: “Their hands get fidgety or they start sweating or start mumbling.

“One of my jobs, when people came to meet the royals, was to make sure they were relaxed and calm.

“If they wanted any advice or guidance, I would give it.

“For example, the gentlemen do a neck bow, not a waist bow.

“Ladies do a curtsy. Not too low down because otherwise you might not come back up.”