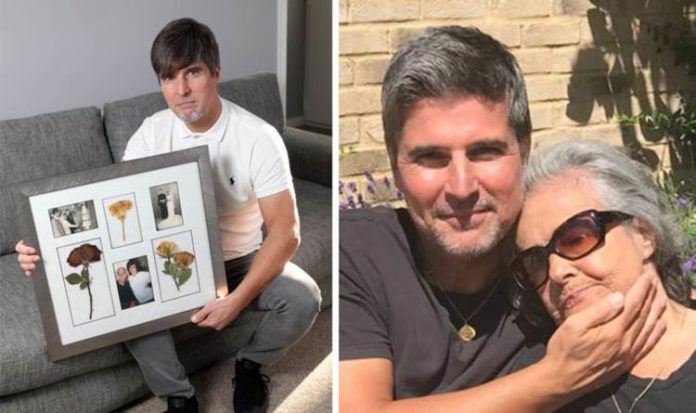 Tony with his mum Antonia who was abused in a care home (Image: Handout)

It would mean that relatives could legally place a camera in their relative’s bedroom to monitor their mental health and stamp out abuse and poor treatment. Ex-model Tony says if his mother, who died in May, had had CCTV in her room when she fell ill with Covid-19, he could have spotted her health decline sooner. Now a host of well-known names have backed his call, with some revealing how their own relatives suffered care-home abuse.

Actress and model Linda Lusardi, 62, said: “My father was in a care home. After two weeks of being there he banged his head. He then ended up in hospital and died of sepsis three weeks later.

“If there had been CCTV, it would have taken out any doubt about what happened to cause the accident. If they have nothing to hide, why would they not mind having CCTV in their premises?”

“My grandma was in a care home and I know she did not have the best of times. With CCTV, maybe her time would have been a lot better and more pleasurable.”

Love Island star Ellie Brown, 22, explained how her grandmother suffered in her care home when she was given a morphine dose twice by mistake.

She said: “I lost my Nanna two years ago to cancer. We had an incident where a nurse came in at 7am and gave her morphine.

“Then at 9am the next nurse came in and tried to give her the same dose again. It resulted in an overdose. An ambulance was called and she was in hospital and died four weeks later.

“When I met Tony his campaign massively touched my heart.”

She added: “The older generation are much more vulnerable so it’s really key to put extra measures of protection in.

“My grandma was a victim of theft in her care home – money was stolen. It really upsets me that people can get away with this.

“When my family offered to put CCTV in my grandma’s room, the care home said ‘no’. Why not?”

Carrie believes it’s ‘important to me as my mum had Alzheimer’s’ (Image: Getty)

Phats & Small singer Ben Ofoedu, 48, who is engaged to Daily Express columnist Vanessa Feltz, said of Tony: “I want to support my good friend in his crusade.

“My mum is in a care home and it’s a thing just for peace of mind and her own safety. Antonia’s Law is a great cause.”

Former EastEnders actress Debbie Arnold, 65, said: “We have to have CCTV in care homes. The reason? We can’t trust some of the people looking after our elderly.

“Some people are fantastic but some abuse them.”

Only Fools And Horses actress Sue Holderness, 71, who played Marlene Boyce for 23 years, added her support, saying: “We must stop the abuse of the vulnerable.”

Jilly said ‘It’s our duty to get behind Tony… we owe it to our elders’ (Image: Getty)

The One Show’s Carrie Grant, 55, added: “My mum was in a care home for many years with Alzheimer’s. It’s not that difficult or expensive to do – this should be standard practice.”

X Factor star Chico Slimani, 49, said: “I’m in full support of CCTV being installed to stop the barbaric treatment that goes on behind the scenes.”

Olympic silver medallist Jamie Baulch, 47, said: “There are some amazing staff who do a great job. But we know that some people slip through the net and there can be abuse. I’m in full support with you, Tony.”

Right Said Fred singer Richard Fairbrass, 67, said: “Our mum was in a care home and well looked after, but that’s sadly not the case for everybody. For everyone who wants to support better care, we all have an investment to make sure this happens.”

Michelle Heaton said ‘my grandma didn’t have the best time in her care home’ (Image: Getty)

Tony said: “Some care homes are atrocious. I wouldn’t put my dog in them. My mother has been a victim of abuse. We should have choices to monitor our loved ones. I want the older generation to be safeguarded. What’s wrong with that?” Last year an independent study found a third of care home staff would welcome CCTV in communal spaces and bedrooms.

“We have seen enquiries to our helpline increase by 110 per cent.”

The Department of Health and Social Care said: “Abuse, especially against vulnerable people in care, is abhorrent and we’re determined to stop it. Any kind of surveillance must consider the privacy and dignity of those it seeks to record.”