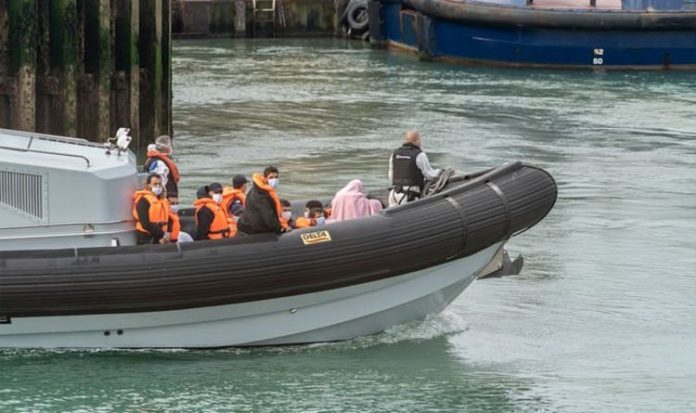 In the deal, agreed with Paris last year, the armed forces provided drones, thermal imaging gear, advanced binoculars, radar technology and a fleet of motorbikes to detect trafficking boats. France has now intercepted 72 percent of all attempted crossings, in part due to the equipment.

A source told The Times about how thermal imaging equipment is now being used to detect boats that traffickers hide in sand dunes on French beaches.

In addition, the British-provided military-grade drones fare better in misty conditions than those used by the French previously.

The source said: “The traffickers would just wait until it was a misty day and launch their boats all at once.

“The visibility issue is less important for the dinghy because you’re just following a route.

“You basically just point and go.”

Napier barracks, a military site in Folkestone, Kent, was repurposed into asylum housing last year for around 400 refugees, with those staying at the Baracks required to sleep in dormitories of up to 28 people.

Ms Patel blamed the outbreak on the asylum seekers, and said: “Within accommodation for asylum seekers, people do mingle, and it is a fact – when we look at what happened in Napier Barracks three weeks ago, people were also not following the rules.”

Evidence revealed in court documents last week showed that Public Health England (PHE) had warned the Home Office two weeks before the barracks were repurposed that the dormitories “were not suitable” for use.

Yvette Cooper, Labour MP and chair of the committee, said in reply: “Effectively you’re blaming those people for not following the rules when they had to sleep 28 people to a room.”

Phil Murwill, head of services at Doctors of the World, said: “From the very beginning, the Home Office has ignored the advice of health experts and clinical organisations, and put politics over people’s lives.

“But blaming those forced to live in dormitories of over 20 people, with shared facilities, for spreading COVID-19 is a new low.”