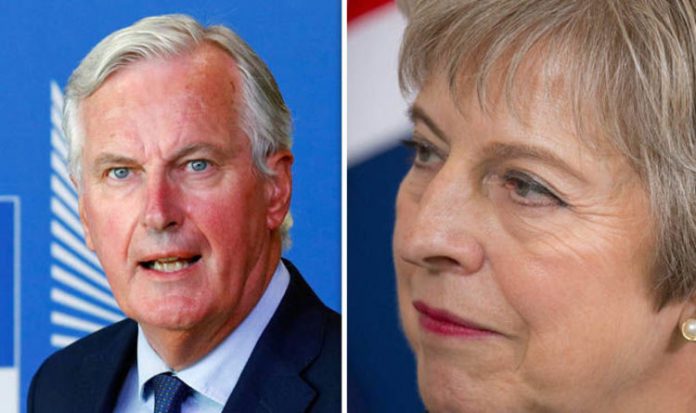 The Prime Minister agreed the plan after thrashing out the main points with her Cabinet at her country home on July 6.

Michel Barnier, the European Union’s chief negotiator, has said current talks are taking place in a spirit of “good co-operation”.

But Tory rebels are said to be plotting against Mrs May and threatening to undermine any deal done with the European Union.

Politicians backing a hard Brexit are angry that the Chequers plan is too closely linked to the EU.

But the International Monetary Fund has warned a no deal would dump “substantial costs” on the UK economy.

What is the Chequers Brexit deal?

Once the deal is done on March 29, 2019, the UK will have 21 months to prepare for the arrangements coming into place at the end of December 2020.

And during this period, the country will be able to negotiate new free trade deals with the rest of the world.

What happens if there is a no deal?

Should Britain fail to leave the EU next March with an agreed plan, it will have to commit to World Trade Organisation terms.

This would means new tariffs could be introduced on goods.

Theresa May has said that “no deal is better than a bad deal” but the IMF has warned of the massive associated costs it goes ahead.

However, Brexiteers Jacob Rees-Mogg and Boris Johnson would rather have one than the current Chequers agreement.