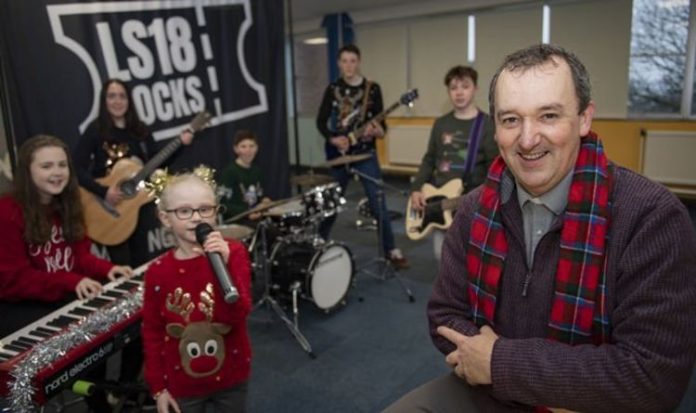 Rev Nigel Sinclair is vicar of St Margaret’s Church in Leeds which boasts one of the UK’s highest spires. And the music-loving clergyman has been so blown away by the LS18 Rocks festive track Virtual Hugs (There’s No One Quite Like You Grandma) he has told parishioners he is going to play the track using his church PA nestled high in the tower to inspire people across Leeds to download the song and get it to number one.

Children from the real-life school of rock took inspiration from the classic 1980’s St Winifred’s Choir anthem to pen their own song about how much they have missed seeing their grandparents during the pandemic.

Many of the young musicians, including lyricist Abby Warner, 14, have been unable to see their grandparents physically for over 10 months and face Christmas seeing them only on screens.

Rev Sinclair said: “It’s such a great song and I absolutely love the message behind it about keeping grandparents safe this Christmas time. Of course we all want to be together physically but it will have to be virtual hugs this year.

“It would be fantastic if LS18 Rocks could get this to number one, the charts are full of old Christmas songs but this is something different, and it is so current to the situation. I‘m really looking to playing it out loud from our bell tower before our Carol service.”

The song will be blasted out just before 2pm on Sunday and the vicar hopes people will all stand on their doorsteps and listen to the song as a sign of appreciation of all the sacrifices grandparents have made during the year.

And the musicians are urging people across Britain to play the track in unison at 2pm on Sunday – so they too can show grandparents their love. Guitarist Maddie Milner, 14, who also sang harmonies on the track, said: “It is going to sound amazing hearing the song being played really loud across our whole town. We would love it if everyone across the UK joined in.

“I have missed seeing my own grandparents properly and giving them a hug this year so, so much and I know everybody feels the same. They were overcome with emotion when they heard the song and the sentiment behind the lyrics.”

The song Virtual Hugs is available on all streaming platforms and money raised will be donated to charities who support older people who have experienced loneliness and isolation this Christmas.