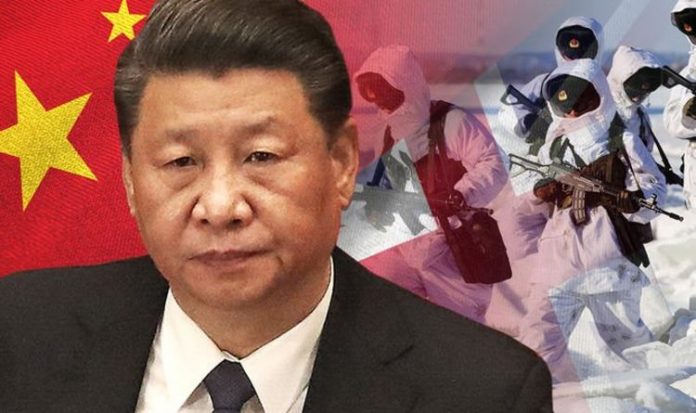 Speaking today, Britain’s highest-ranking naval officer has revealed both China and Russia now have a viable route to attack the UK through the Arctic Sea. Due to climate change, he insisted more maritime routes were opening up across the world. With the Arctic regressing, he warned China’s large naval force now has its best chance in over 30 years to pass the through the region.

Coupled with China, he indicated Russia could also use these routes due to its proximity to the region.

He said: “Climate change is a concern for all of us, but it is opening up new maritime trade routes across the top of the world, halving the transit time between Europe and Asia.

“And we sit at the gateway to those routes.

“But when China sails its growing navy into the Atlantic, which way will it come – the long route, or the short?

“And these routes skirt the coast of that resurgent Russia.

“A Russia that is now more active in the Atlantic – our back yard – than it has been for over 30 years.”

The admiral also claimed these important trade routes, account for £8trillion in maritime trade which acts as the crucial veins for the world economy.

While more importance is being paid to technological defences, the admiral insisted the Royal Navy still has a key role to play.

“The UK hold that great responsibility as a nuclear state, standing shoulder to shoulder with the rest of the world’s leading powers.”

The Royal Navy dispatched a new strike force this week to lead a NATO operation.

The New Carrier Strike Group consisted of a nine-ship force led by UK forces and will journey to the North Sea for exercises.

The HMS Queen Elizabeth will lead the group which comprises 15 fighter jets, 11 helicopters and 3,000 personnel.

The group’s first operational deployment is planned for 2021 and could well be used for freedom of movement navigations in the South China Sea.

“Protected by a ring of advanced destroyers, frigates, helicopters and submarines, and equipped with fifth-generation fighters, HMS Queen Elizabeth is able to strike from the sea at a time and place of our choosing; and with our NATO allies at our side, we will be ready to fight and win in the most demanding circumstances.

“Carrier Strike offers Britain choice and flexibility on the global stage; it reassures our friends and allies and presents a powerful deterrent to would-be adversaries.”