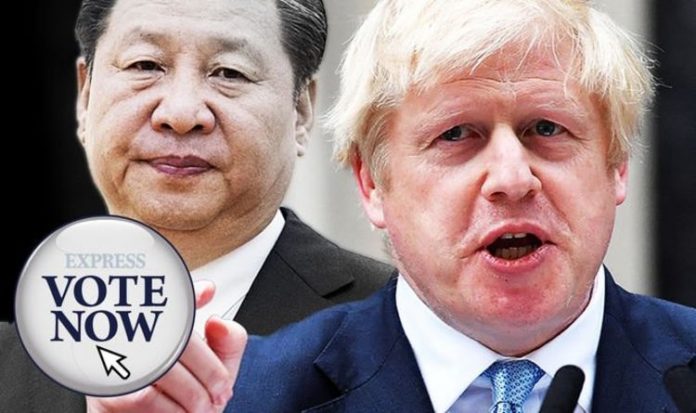 New figures show a number of Government departments helped fund a wide range of schemes totalling £67.8 million in 2019 – an increase from £55.6 million in 2018. The astonishing amount was paid out as tensions between London and Beijing erupted over Hong Kong, tech giant Huawei and alleged human rights abuses against China’s Uighur ethnic group.

The cash went on photography projects, work to get China to stop animal testing, a scheme to help local populations spend their money more effectively and investigating the air quality in Beijing.

One project spent £200,000 to help improve China’s economy and “address market failures and weaknesses” to help it perform better.

Around £500,000 more was spent on “supporting democracy and human rights” in China.

Overseas aid sources aid even more UK cash would have gone to China through EU and UN handouts.

But many are questioning why Britain continues to fund Chinese projects when relations between the two nations have sunk so low.

Britain was outraged earlier this year when China imposed a draconian security law on Hong Kong after months of pro-democracy demonstrations in the former UK colony.

Hong Kong was handed back to China in 1997 when the UK and China made an agreement to introduce “one country, two systems” which was set to last until 2047.

But the deal – known as the Joint Declaration – is under threat because the new law that gives China sweeping new controls over the people of Hong Kong.

READ  Consultation on next steps for more environmentally friendly haulage

The Hong Kong row came amid rising tensions in the West over the influence of Chinese tech giant Huawei.

Many countries were considering using Huawei to build their new 5G networks to provide faster internet but concerns soon began to grow that the Chinese government could use the company to spy on foreign countries.

Britain promptly ordered the removal of all Huawei kit from 5G networks by 2027 and also banned mobile providers from buying new Huawei 5G equipment by the end of 2020.

Other countries, including the US, Australia and New Zealand, have taken similar measures although Huawei maintains it has never been asked to spy.

A Government spokesman said it was in Britain’s national interest to support relevant programmes in China.

He said: “The UK is a force for good in the world, helping to solve global challenges while protecting our national interests.

“UK aid is focused on responding to humanitarian crises, including lifesaving support to Yemen, helping the poorest billion in developing countries and improving global health by tackling deadly diseases.”

“We ended our traditional bilateral aid programme to China in 2011 and now offer the country expertise and skills to help tackle global issues like climate change, which is firmly in the UK national interest.”