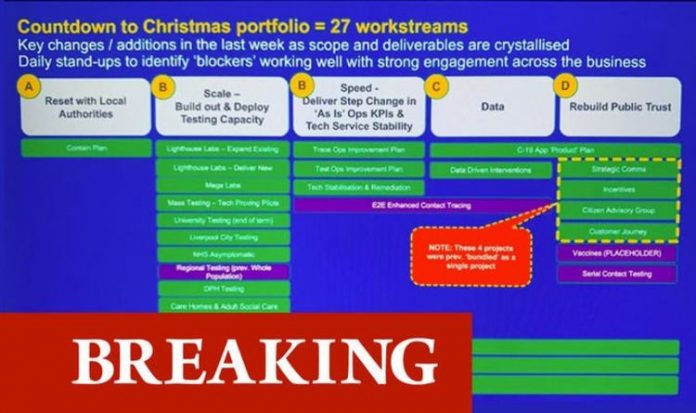 Leaked documents indicate the coronavirus body believe they need to “reset” their relationship with local councils and public after losing their trust.

The body has produced a powerpoint called “the path to Christmas” which outlines its plan.

Test and Trace head Baroness Dido Harding has continued to claim the service is working well with local councils.

She also claimed the service has been engaging the public effectively.

However, the slides revealed bosses are aware of the mistrust felt by the public and local officials towards the service.

The Test and Trace service has been widely criticised for its poor performance.

Questions have been raised as to why the measures are being shown to contact tracers today, two weeks into the country’s second national lockdown.

When the country entered another lockdown on November 5, it was supposed to buy time for the Test and Trace system to improve.

The service faced a barrage of criticism after briefly losing tens of thousands of cases following a mix-up with an Excel spreadsheet.

Trying to rebuild trust with local officials comes just weeks after Prime Minister Boris Johnson admitted he shared “people’s frustrations” at the time it took for tests to be processed.

He said during a Downing Street briefing: “I share people’s frustrations and I understand totally why we do need to see faster turnaround times and we need to improve it.

“We need to make sure that people who do get a positive test self-isolate – that’s absolutely crucial if this thing is going to work in the way that it can.”