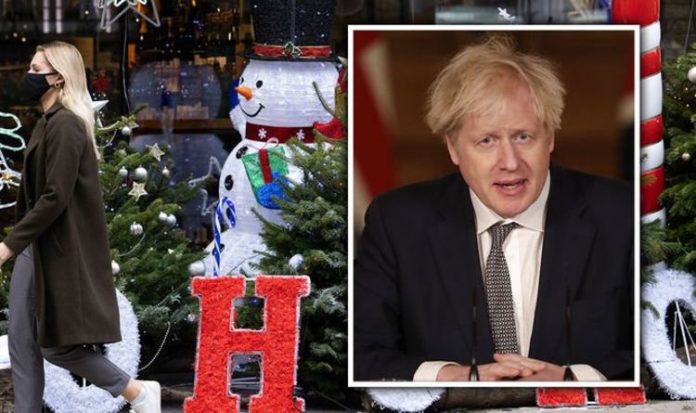 After months of lockdown, the nation has been looking forward to spending the Christmas period with loved ones. The Christmas bubble period runs from December 23 to December 27 in the UK, but in recent weeks there has been concern about the impact household meetings could have on the spread of coronavirus. Prime Minister Boris Johnson provided an update on the Christmas bubble rules at a Downing Street press briefing today (December 16).

But as Covid cases remain at worrying levels in several parts of the UK, the Government has faced pressure to strengthen the Christmas restrictions.

On Wednesday, the Prime Minister confirmed the Christmas bubble period would not be cancelled.

However Mr Johnson literally urged people to have a “merry little Christmas” this year, and highlighted a number of ways people can help prevent the spread of Covid-19.

What are the Christmas bubble rules?

Boris Johnson urged people to “think hard” about how to prevent the spread of coronavirus this Christmas, stating at the briefing that a “smaller Christmas is going to be a safer Christmas”.

Mr Johnson told the Downing Street press conference: “I want to be clear, we don’t want to ban Christmas, to cancel it, I think that would be frankly inhuman and against the instincts of many people in this country.

“But what we are saying is that that guidance, the three households and the five days, that should really be regarded as a maximum, those are the outer limits.”

Mr Johnson suggested people should consider waiting until elderly relatives have been vaccinated before meeting them.

Professor Whitty said during the festive bubble period, people should “keep it small, keep it short, keep it local and think of the most vulnerable people”.

Professor Whitty added: “We are tantalisingly close to the stage where anybody who gets into trouble as the result of actions this Christmas would have been protected in the very near future.

“So, it is very important that people think about that when they make decisions over the next few weeks.”

Many have asked for the Christmas bubble restrictions to be reviewed in light of rising coronavirus cases.

Following the Downing Street briefing, Labour Deputy Leader Angela Rayner has said the decision by the Prime Minister not to review the lifting of coronavirus restrictions over the Christmas period is “dangerous”.

She said on Twitter: “After telling millions of people to make plans for Christmas, and lifting restrictions for Christmas, the Prime Minister is now telling people not to do what he told them to do, but that he won’t review the lifting of the restrictions. Dangerous, life-threatening incompetence.”