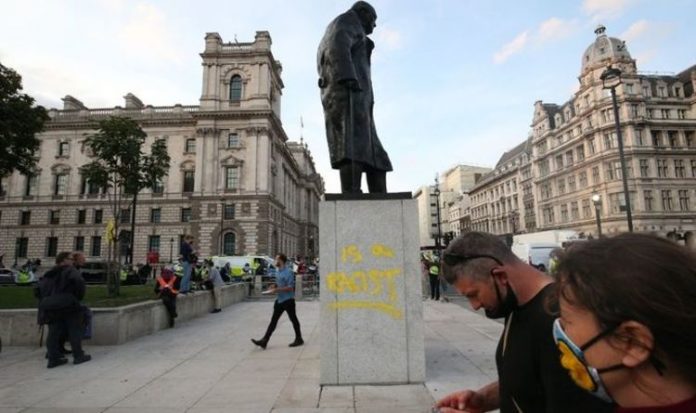 Critics have warned the programme risks legitimising attempts to rewrite British history. But the college insists Sir Winston should not be “mythologised as a man without significant flaws” and claimed “on race he was backward even in his day”.

He said: “It seems to me extremely unlikely young ladies and gentlemen will get a balanced view of Churchill’s life.

“I would ask Churchill College to have speakers also there to bring a sense of proportion to this idiotic debate that’s got out of control in all our universities.”

Frank Furedi, emeritus professor of sociology at Kent University, warned: “This is about a plundering of history and a systematic attempt to recant the past.”

The event, entitled “The racial consequences of Mr Churchill” promised to “reassess” the leader and was due to feature a controversial guest speakers including Professor Priya Gopal, a fellow at Churchill College Cambridge and staunch critic of the British Empire.

Kehinde Andrews, a professor of Black Studies at Birmingham City University who last year condemned the singing of Rule, Britannia! at the Proms, was also on the line-up.

Britain’s World War 2 leader has become a divisive figure in recent years and his reputation came under the spotlight at the height of last summer’s Black Lives Matter protests.

At one stage his statue in Westminster was boarded up to prevent vandalism during a series of marches through the capital.

And there was more controversy when the National Trust was accused of “defaming” Sir Winston’s memory to suit a “woke agenda”.

Members of the charity threatened to cancel their memberships amid claims the organisation had become “too political” after a report linked its properties to colonialism and slavery.

The backlash came after the Trust published a 115-page report into links between colonialism and slavery.

There was further outrage when it emerged Imperial War Museum bosses had decided to re-examine Sir Winston’s political views on “sensitive topics” such as race.

The re-examination was sparked after the word “racist” was daubed on the Churchill statue during a protest in September.

It is understood the Imperial War Museum commenced talks on Sir Winston’s status shortly after the incident.

The museum holds the famous Churchill War Rooms, which was the base of the UK government during World War 2.