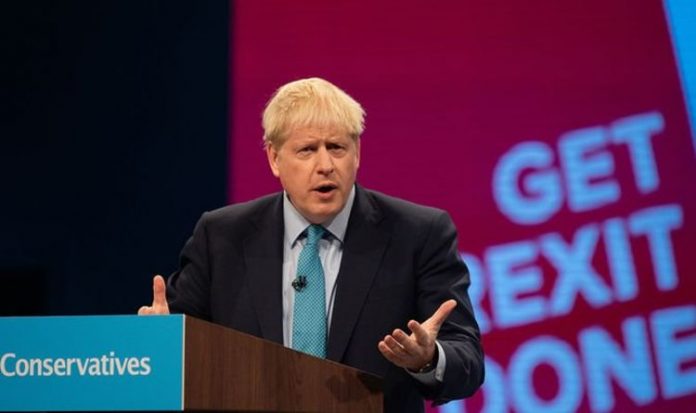 This year’s Conservative Party Conference will take place over video conferencing software and in a new virtual 3D exhibition hall amid COVID-19 restrictions on large gatherings. The conference begins this weekend on Saturday, October 3.

Coronavirus has forced all of the main political parties to either move their annual conference online or cancel altogether.

The gathering of the party’s members was due to take place in Birmingham in October – but has been switched to online due to COVID-19 fears.

Thousands of activists, politicians, journalists and lobbyists normally attend the party conferences to debate policy and socialise – and the events are major source of revenue for the main parties.

Attendees will be able to watch the conference and fringe events from the comfort of their own home, with prices varying for party members and guests dependent on the event taking place.

Key party figures and supporters will likely be hosting events and delivering speeches across the conference – including the Prime Minister and Chancellor Rishi Sunak.

Speaking to PoliticsHome, party co-chair Amanda Milling said: “We’ve built a platform where it will look and feel like a conference but on a computer screen.

“You’ll go in and there’ll be the entrance area – the foyer – then you’ll be able to go into different parts.

Mr Johnson will likely be on the defensive at this year’s conference after a rocky first year in office.

Fellow Conservatives are beginning to snap at the Prime Minister’s heels, and rumours have circulated that he has fallen out with his number two Rishi Sunak.

The UK currently has the highest death toll from COVID-19 throughout Europe and the ongoing Brexit anguish has divided the Tory party in recent weeks.

The bombshell Internal Market bill has rattled a considerable number of MP’s from all sides, as the pushing through of the bill will undermine the Northern Ireland protocol.

When will Boris Johnson speak?

As a usual part of any party conference, Mr Johnson will deliver a keynote speech to party members via video link during the conference.

The Prime Minister will give his keynote speech on Tuesday, October 6 at 11.30am.

Other talks on the agenda at this year’s conference is the Enterprise Forum’s conversation with Chancellor Rishi Sunak at 5.15pm on Monday, October 5.

On Sunday, October 4 at 3pm, Home Secretary Priti Patel will give her keynote speech.

Foreign Secretary Dominic Raab will give his speech to the conference on Saturday, October 3 at 3pm.