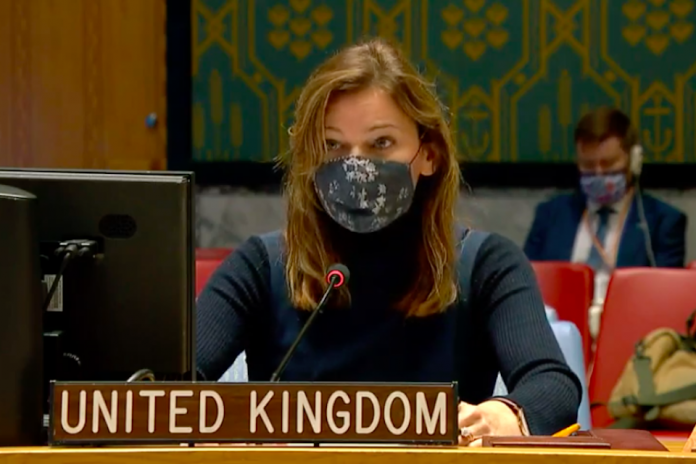 Thank you Mr President and thank you to both for your comprehensive updates.

I would like to start by welcoming the improvements in bilateral relations between the Governments of Sudan and South Sudan. The United Kingdom wishes to commend the role that the Government of South Sudan played in facilitating the negotiations that led to the signing of the Juba Peace Agreement on 3 October.

The United Kingdom calls for the swift implementation of this agreement, including in the Two Areas.

We also welcome the resumption of negotiations between the Government of Sudan and SPLM- Al Hilu. We continue to urge all parties to engage constructively, without preconditions, in order to deliver a peaceful and swift resolution.

Madam President, we are also encouraged that last month saw a high-level meeting between representatives of Sudan and South Sudan to discuss the final status of Abyei and other border areas. The indicated willingness of both governments to seize this opportunity is long overdue.

It is however, disappointing that this rapprochement has yet to translate into progress on the ground in Abyei. We call on both countries to build on this renewed engagement at the senior and local levels, towards resolving the final status of Abyei.

Madam President, turning to UNISFA, the United Kingdom commends the role that the Mission has continued to play in supporting peace and security in Abyei.

We welcome UNISFA’s ongoing engagement with the Governments of Sudan and South Sudan, the implementation of the Quick Impact Projects, the removal of explosive hazards and the continuation of humanitarian support. UNISFA’s continued efforts to support women’s empowerment in Abyei are also critical.

We regret however, that the Mission continues to face obstacles to delivering its mandated activities.

It is clear that these blockages are severely affecting the stability and security of the region. This comes at a time when there have been increasing incidents of violence, including attacks on peacekeepers, and criminal acts, alongside the continued appalling rates of sexual and gender based violence in the region.

We urge both parties to work with the Mission to progress the establishment of the Abyei Police Force as a mechanism to ensure stability and security issues are addressed.

Madam President, there is a clear need to boost the Mission’s civilian and police components to empower UNISFA to best support the local community.

We therefore repeat our call on the Government of Sudan to facilitate the issuing of all outstanding visa requests, especially those for police personnel.

This Council has also repeatedly called for both the Governments of Sudan and South Sudan to facilitate the operationalisation of Athony Airstrip.

COVID-19 had underlined the importance of ensuring swift MEDEVAC provision for UN personnel. This is particularly the case for UNISFA given its remoteness and the continued denial of this request unfortunately shows a disregard for the safety of UN personnel.

Finally, we repeat our call for all parties to fully respect International Humanitarian Law and allow humanitarian actors to deliver aid to those in need without hindrance.

In closing, Madam President, the UK commends the vital role UNISFA plays in maintaining the stability of Abyei and the assistance it provides to the achievement of a final settlement on its status. We urge the Governments of Sudan and South Sudan to see the UN as a key partner in supporting their efforts on this matter.