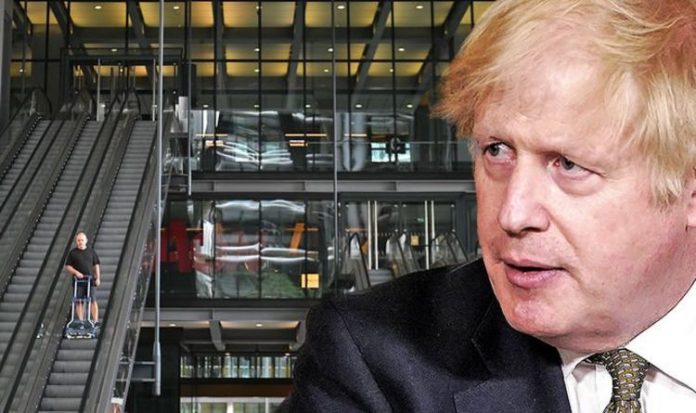 And the polling guru warns such attitudes will only be reinforced by a second wave this winter. Sir John, Professor of Politics at the University of Strathclyde, was speaking prior to confirmation the R number has now risen above one, meaning COVID-19 is being transmitted in the community.

Yesterday a total of 3,497 people tested positive, marginally below the figure of the day before, 3,539, but indicative of an increasingly worrying trend.

Sir John said there were currently significantly more people back at their places of work than there were at the beginning of June.

He told Express.co.uk: “Not all the evidence is consistent – there still seems to be some disagreement about exactly how many people are working at home.

“But ONS’s lifestyle survey suggests we have now got 20 percent of those people who are in employment, which includes those who are on maternity leave or whatever, working from home.

“Whereas it was 38 percent at the beginning of June so it has come down quite considerably.

“50 percent of people who are in employment are working from a place of work exclusively, up from 30 percent in June so there has clearly been a switch.”

“Younger people find it tougher to work from home than older people although it depends on your home circumstances.”

However, the lockdown – and the Stay Home, Save Lives, Protect the NHS slogan – were likely have had an impact on people’s attitudes, he said.

He explained: “Redfield and Wilton found that something like 60 percent of people saying they had worked at home at some point during the lockdown, of whom three-quarters said they would like to continue partly doing so.

“We are probably looking at people wanting to spend a day or two at home.

“There is still concern about those going into work about how safe it is.

“Certainly some groups find it more difficult to work from home than others unsurprisingly.

“It’s younger people who are getting together for social reasons.”

Asked whether the concept of coronaphobia – in other words, a general concern about returning to everyday life as a result of a fear of COVID-19 – was an issue, Sir John said: “Having told everybody to do all of that then obviously people will adjust their willingness to do things and how they feel about what they do.

“If you are 25 it is true you could get a nasty bout which might leave you with a long term illness but more likely a nasty bout of flu.”

He also pointed out the world was likely still in the early stages of the pandemic, given no vaccine was yet readily available.

He added: “We wait and see. If it spreads back into the population then we will see people going back into hospital and those kinds of headlines will inevitably make people more cautious.”