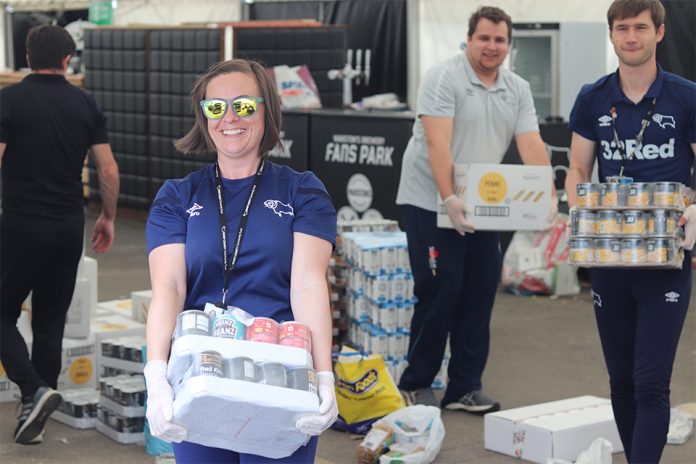 More than 8,000 small and medium charities across England have been awarded a share of £200 million to help them continue their vital work with vulnerable people during the pandemic.

The money has helped a wide range of causes working on the front line of the pandemic, from FC United’s project to help vulnerable families in Manchester, to Re-engage, a charity supporting older people at risk of social isolation across the country.

Since its launch in May, the Coronavirus Community Support Fund has directed cash to organisations who provide key services and support vulnerable people.

Distributed by The National Lottery Community Fund, it is part of the Government’s £750 million support package for charities announced earlier this year.

Charities are there when we need them the most, and this emergency funding has kept their doors open during the biggest crisis for a generation.

Our £200 million Coronavirus Community Support Fund has reached thousands of worthy causes in communities across the country, ensuring they can be there for millions of vulnerable people and families.

Communities and charities across the country have responded magnificently to the Covid crisis and those who have benefited from the CCSF funding that we have distributed encapsulate the generosity, spirit and expert knowledge that we have all seen in our local neighbourhoods.

From the community cafes that have turned into food distribution hubs, to the counsellors and peer mentors who have moved their services online, to those offering advice and support to people struggling with debt or dealing with grief: they have all inspired and moved us in equal measure.

We will continue to support communities, thanks to money raised by National Lottery players to support as much of this vital work going forward as we can.

Charities across England have benefited from the £200 million Coronavirus Community Support Fund, designed to help them meet increased demand as a result of coronavirus and continue their day-to-day activities supporting those in need.

This week the Culture Secretary carried out a virtual visit to Derby County Community Trust, who were awarded £68,000 to support the local community with food parcels, as well as helping people stay active and look after their mental wellbeing during the pandemic.

The Loneliness Minister, Baroness Barran, virtually visited two organisations that have received funding from the £200 million to help people at risk of isolation. Re-engage, which supports people aged over 75 who live alone across the UK, received £66,000 for its ‘Call Companions’ project which trains and mentors volunteers to offer regular telephone calls to older people. Calthorpe Community Gardens in Kings Cross, north London, received £25,508 to run classes addressing loneliness and isolation in the local community.

Other projects to benefit from the Coronavirus Community Support Fund include:

Due to the pandemic we have seen a huge surge in carers needing our support due to diminishing mental health during the lockdown. Thanks to the Government and The National Lottery Community Fund, we’re able to give carers access to the counselling services they may need without long waiting times; offering telephone support and Zoom sessions to suit the individual. The funding will also enable us to expand the counselling service to deal with future needs as we expand across South Yorkshire.

The Department for Digital, Culture, Media and Sport (DCMS) led the allocation and distribution of the overall £750 million charities package. Alongside the £200 million Coronavirus Community Support Fund, this included:

READ  Change of Her Majesty’s Ambassador to Kuwait

This is alongside funding provided to a range of organisations including St Johns Ambulance, mental health charities, air ambulances, projects working to provide homelessness support and groups tackling loneliness.

The Government also match-funded the British public’s generous £37 million donation to the BBC’s Big Night In charity appeal – with Comic Relief, Children In Need and the National Emergencies Trust distributing the cash to charities on the frontline.

It comes on top of the £150 million released from dormant accounts to help social enterprises get affordable credit to people who are financially vulnerable and support charities tackling youth unemployment.

Charities have also had access to wider measures to support the economy, including the Treasury’s multi-billion-pound job support and loan schemes.

Thanks to National Lottery players, £30 million is raised every week for the UK’s good causes, and £41 billion has been distributed to 565,000 good causes across the UK since 1994.

The £200 million coronavirus community support fund covers England only, however as part of the whole charities package, £60 million was provided to the devolved administrations as per the Barnett formula (£30 million for Scotland, £20 million for Wales and £10 million for Northern Ireland).