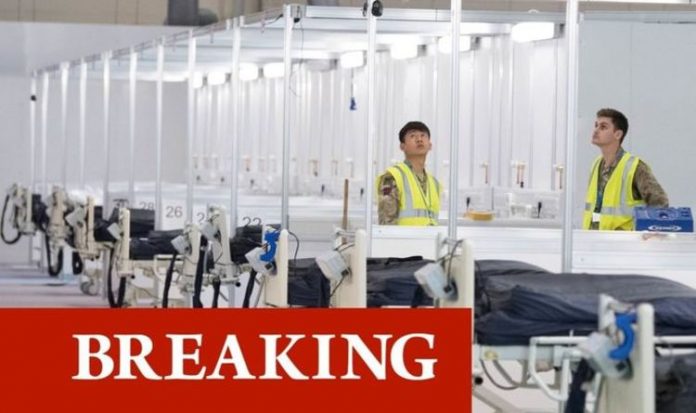 In their joint study, Imperial and Ipsos Mori concluded the R-rate has now fallen to 0.88 in the country.

In the study which took 105,000 swab tests between November 13 to 24, the research showed 0.96 of the country’s population had the virus.

That number is a 30 percent drop in the number of infections compared with the previous findings as of November 2.

Professor Paul Elliott said of the REACT study’s findings: “We’re seeing a fall in infections at the national level and in particular across regions that were previously worst affected.

“These trends suggest that the tiered approach helped to curb infections in these areas and that lockdown has added to this effect.

“As we approach a challenging time of year, it’s even more vital that through our actions and behaviours we all play our part in helping to keep the virus at bay.”

On November 2, the research showed the more than one in 80 people had the virus before the second national lockdown occurred.

According to the date, the study showed the number of people being infected was found to be halfing every 37 days.

The study also pointed to the North West and North East as two of the regions which have seen rates drop at the highest level.

The study also stated the East Midlands and London had not seen much in infection rates reducing.

Health Secretary, Matt Hancock stated the data was a welcome boost but still not enough for the country to ease up.

He added: “Thanks to the huge efforts of the public over the last few weeks we have been able to get the virus better under control to keep our NHS open.

“This latest data shows we must maintain our resolve and we cannot afford to take our foot off the pedal just yet despite the very encouraging fall in cases and advances in vaccines.

“The next few weeks and months are the busiest time of year for our NHS, so it’s vital we all continue to follow new local restrictions, wash our hands, wear a face covering and observe social distancing.”