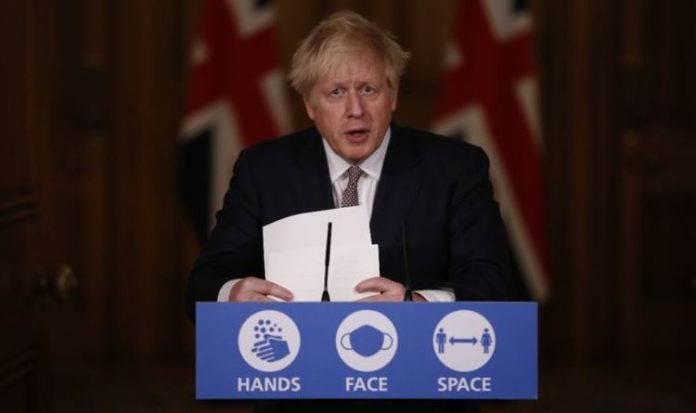 The Prime Minister told the country it has control of its destiny when the tier system returns next Wednesday. He said: “Your tier is not your destiny. Every area has the means of escape. And I have no doubt that together we can get through this winter, suppress the virus until vaccines come to our aid, and then reclaim our lives and all the things that we love.”

The tiers, which differ to the system in place before the current national lockdown, mean more than 55 million people in England will be put into the top two tiers from December 2.

Around 32 million people will be under Tier 2 while 23 million will go into the toughest Tier 3.

Just 713,573 residents in the Isle of Wight, Cornwall and the Isles of Scilly will live under Tier 1, which has the most relaxed restrictions.

Meanwhile, official figures showed a 25 percent reduction in cases in the last week. However, a further 498 deaths were recorded yesterday, along with 17,555 new lab-confirmed cases.

And just 60 percent of close contacts of people who tested positive for Covid-19 in England were reached through the system in the week ending November 18.

The Prime Minister warned people not to be complacent and that the dangers had not gone away.

He said: “If we ease off now, we risk losing control of this virus all over again, casting aside our hardwon gains, and forcing us back into a NewYear national lockdown with all the damage that would mean.”

He also revealed that the Ministry of Defence has put 14,000 troops on standby to rollout rapid testing in areas in Tier 3.

It would help them move to a lower level, he explained.

“Now testing on this scale is untried but in due course, if it works, where people test negative it may also be possible for families and communities to be released from certain restrictions even if their home area stays in Tier 3.”

The tier allocations will be reviewed on December 16, then every week after that.

Mr Johnson admitted the new rules “will bring a great deal of heartache and frustration”, especially for pubs and restaurants.

But he said their temporary closure in some areas is the price that must be paid to keep schools open.

And the CBI said the changes would let some parts of the economy “look towards a recovery”.

UK policy director Matthew Fell said: “It gives our high streets a chance to rescue some of the vital festive trading period. But for other businesses, the restrictions in Tiers 2 and 3 will leave their survival hanging by a thread. Hospitality will remain frozen.”

Most of northern England as well as Kent, large parts of the Midlands and pockets of the South-west will be in Tier 3.

London and most of the South-east, South-west and East of England will be in Tier 2.

MPs are to vote on the new system on December 1, the day before it comes into force. It will not be in place during the Christmas “bubble” of December 23 to 27, when up to three households will be able to meet under the same roof.

London will be in Tier 2 (Image: DANIEL LEAL-OLIVAS/AFP via Getty Images)

Yesterday England’s chief medical officer Professor Chris Whitty urged families not to hug to help protect lives. He said: “Would I encourage someone to hug and kiss their elderly relatives? No, I would not. It’s not against the law, and that’s the whole point.

“You can do it within the rules that are there but it does not make sense because you could be carrying the virus and, if you’ve got an elderly relative, that would not be the thing you want to do in the period where we’re running up to a point where actually we might be able to protect older people.”

The Government has promised to publish an impact assessment of the measures to show the evidence for the new rules. But some Tory backbenchers warned they would vote against the plans. Steve Baker, leader of the Covid Recovery Group of lockdown sceptics, said: “The authoritarianism at work today is truly appalling. But is it necessary and proportionate to the threat from this disease?”

Sir Graham Brady, chairman of the influential 1922 Committee of Conservative MPs, said: “I have severe reservations on so many different levels.”

Former minister Tobias Ellwood, who is the MP for Bournemouth East, said he couldn’t understand why the town was in Tier 2.

He said: “With only 160 cases per 100,000 people I’m puzzled to see us placed in this tier which will cause further hardship for our hospitality industry. I will not be supporting the Government’s motion to introduce this next week.”

Former ministers Dr Liam Fox and John Penrose, who represent North Somerset and Weston-super-Mare, said the decision to place them in Tier 3 “isn’t right nor fair”.

Tory Tom Tugendhat, MP for Tonbridge, Edenbridge and Malling in Kent, said: “We went into lockdown at Tier 1 and came out at Tier 3.”

West Worcestershire MP Harriett Baldwin said: “Over 23 million of us were living under Tier 1 restrictions before the lockdown – it will be under one million in December.There is no logic in having a month of lockdown only for people to have to live under an even more severe set of restrictions afterwards.”