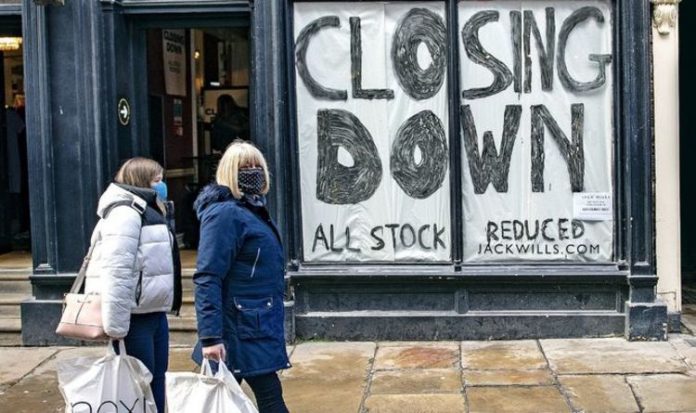 One snapshot shows York’s iconic Coney Street in its proud and bustling heyday, with shoppers strolling to thriving stores. The other captures the ancient thoroughfare this week, its row of ornate buildings blighted by boarded-up windows and “To let” signs. Coney Street is possibly Britain’s most beleaguered high street after a rash of closures. It has fallen victim to the rise of internet shopping and out-of-town centres, followed by lockdown.

Last week, York came top of a league table of towns and cities worst-hit by shopping trends, compounded by coronavirus.

Research by the Local Data Company and PwC showed the city suffered the net loss of 55 chain stores between January and June.

Locals say the axe has fallen most savagely on Coney Street, the city’s commercial hub since the 14th century.

Yesterday, the Daily Express counted 13 shops closed permanently or temporarily out of around 60 units.

Among premises still lying deserted were those vacated by big names including Dorothy Perkins, Warehouse, Carphone Warehouse and River Island.

Others to have shut in recent years include BHS, jewellers Swarovski, and Burgins Perfumery, an independent trader for nearly 140 years.

The ghostly shells stand between historic buildings such as the medieval St Martin le Grand Church and the 15th-century Guildhall.

In neighbouring Parliament Street, there are empty premises where Tui, Thorntons and Vision Optics used to be.

Shopkeeper Phil Pinder, who chairs York Retail Forum, said: “Covid has been the accelerant to what was happening before.

“We have similar problems to everywhere else, but it’s a shock to see we are top of the list. It’s definitely the worst that it’s ever been.

“Coney Street was once our most famous street. Suddenly we’ve got maybe nine or 10 shops on that street empty, and it’s not a long street.”

Phil, who runs Potions Cauldron, a quirky drinks emporium, said the pandemic was the last straw after losing out to shopping centres and the web while faced with high rent and rates.

Kirsty Parker, 28, who works at Axis Barbers, said: “Even our sandwich shop, which had been trading for 25 years, was not immune and was closed when we returned to work. It is baffling how this is allowed to happen in such an important, historic place.”