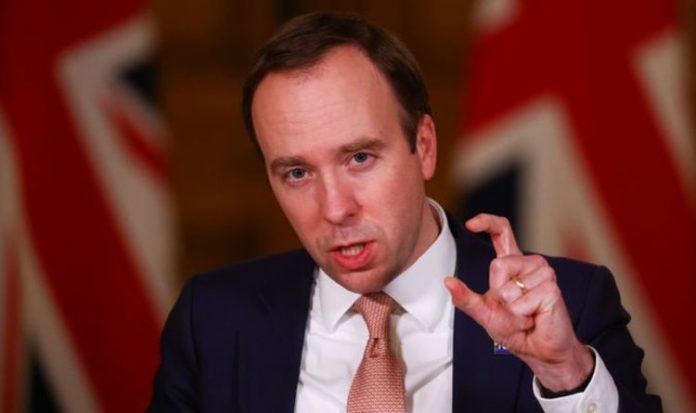 The UK recorded 20,964 cases yesterday – a rise of 4,386 compared with Wednesday’s figure. It marks the highest daily rise since mid-November and brings the total number of infections during the pandemic to 1,787,783. Another 516 coronavirus-related deaths were also reported in the latest 24-hour period, falling slightly by 17 over the previous day.

Health Secretary Mr Hancock warned the fight against the pandemic was not over as he launched a mass schools testing programme in the capital’s worst-hit boroughs.

The rapid lateral flow tests, which give a result within half an hour, come amid fears teenagers are fuelling the surge of infections throughout London.

They will be deployed in secondary schools in the seven boroughs with the highest infection rates in a bid to curb the spiralling cases. Virus infections are surging across the South-east and official figures show London is now Britain’s Covid-19 hotspot.

The capital had the highest case rate of anywhere in the country in the week up to December 6, with 191.8 infections per 100,000 people – rising from 158.1 in the previous week.

The city is widely expected to be plunged into a Tier 3 lockdown next week.

Figures show infections have been spiking among children aged 10 to 18 at a much higher rate than any other age groups.

Mr Hancock also announced the Pfizer/BioNTech vaccine is being given in 73 hospitals and promised it would be available in some GP surgeries from next week and in care homes before Christmas.

Schools in parts of Essex and Kent will also be involved in the scheme amid fears youngsters are driving regional epidemics.

Speaking at a Downing Street news conference, Mr Hancock said everyone should “stay on our guard now and through Christmas”.

He said: “The fall in the number of cases has flattened off and is rising in some parts of the country, like Kent and Essex and some parts of London.

“This shows us that this fight is not over and how we must all play our part and stay on our guard now and through Christmas.

“We’ve got help on the horizon and we can all see that with the vaccine, so don’t blow it now.”

Mr Hancock added: “Even with this mass vaccination programme under way, for the next few months we will not have sufficient protection through the programme.

“We have to all keep acting as if we can still pass it on – that is the safest way to get the number of cases down.”

Mr Hancock said he was “particularly concerned” about the cases spreading in London, Kent and Essex. He said: “Looking into the detail, the testing results and survey shows us that by far the fastest rise is among secondary school age children 11-18 years old, while the rate among adults in London is broadly flat.

“But we know from experience that a sharp rise in case in younger people can lead to a rise among more vulnerable age groups later.

“We need to do everything we can to stop the spread among school age children in London right now. We must not wait until the review which will take place on December 16. We need to take targeted action immediately.”

England’s chief medical officer Professor Chris Whitty said rising rates of infection in the South-east were “concerning” and questions would have to be asked about whether more measures were needed.

He said: “Of course we’re concerned and anyone living in those areas is going to be concerned.

“Throughout this there’s a very difficult balance where if we don’t do a sufficient number of things, the rates start to go up.”

Prof Whitty said rates were falling “really quite consistently” in areas such as the Midlands where stricter regulations had been obeyed.

Meanwhile hospitals from Devon to Birmingham and Lancashire will join the network of sites across England delivering the world-leading Covid-19 vaccine programme, it was announced yesterday.

But the travel industry suffered a fresh blow, along with people returning from the Canary Islands.

Transport Secretary Grant Shapps announced the popular Spanish holiday destination had now been removed from the safe travel corridors list. It means from 4am tomorrow, people arriving in the UK from the islands must self-isolate.

Travel firms badly hit by the pandemic recorded a surge in bookings for the Canaries when the islands were added to the travel corridors list in October.

But yesterday Mr Shapps said the removal was due to a rise in weekly cases and positive tests of the virus.

Paul Charles, chief executive of travel consultancy The PC Agency, said: “It’s utterly devastating news for the thousands of British travellers who booked to go to the Canaries for Christmas and New Year.

“It’s also a body blow for travel firms who’d seen an uplift in bookings for the winter after the Canaries were added to the travel corridor list.

“It now means thousands of refunds and lost bookings for a sector that needed the Canaries to help them recover.”

Meanwhile Botswana and Saudi Arabia have been added to the travel corridors list.