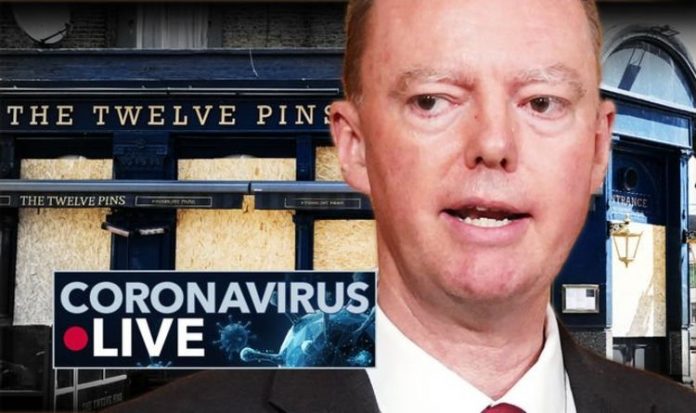 Boris Johnson unveiled a new three-tier system of local lockdown measures in England yesterday, with tier-one indicating a “medium” alert level, tier-two “high” and tier-three “very high”. The alert level will coincide with local infection rates. Tier-three will see areas face restrictions similar to those introduced at the start of the pandemic.

But England’s Chief Medical Officer has said the tier-three rules are “not sufficient” on their own to limit the spread of coronavirus, and suggested extra measures could be introduced.

Professor Whitty said: “I am not confident, and nor is anybody confident, that the Tier 3 proposals for [areas with] the highest rates – if you did the absolute base case and nothing more – would be enough to get on top of it.

“And that is why there is a lot of flexibility in the Tier 3 level for local authorities… to actually go up that range so they can do significantly more than the absolute base.”

“Because the base will not be sufficient, I think that’s very clearly the professional view. But there are quite a lot more additional things that can be done within that, with local guidance.”

The highest alert level will see people banned from socialising with other households both indoors and in private gardens, while bars and pubs will be closed unless they can operate as restaurants.

Non-essential shops, schools and universities will remain open throughout.

Tier-two bans the mixing of households indoors and restricts meetings in private gardens to two households, as long as the rule of six and social distancing guidelines are adhered to.

Tier-one sees the continuation of current guidelines, which includes the 10pm curfew for bars, pubs and restaurants and the rule of six.

MPs will debate and vote on the measures today and the new tiered system will come into effect on Wednesday at 5pm.

8.57am update: No other areas will join Tier 3 this week

Communities Secretary Robert Jenrick ruled out any other areas joining the Liverpool city region in Tier 3 this week but said there is no time for “party politics” when discussing further measures.

He told BBC Radio 4’s Today programme: “What we don’t want to do is impose measures on parts of the country without the consent of local communities and their local leadership.

“So we made a specific decision, and many people have been calling for us to do this, to work intensively with those local leaders.

“I think that bore fruit over the weekend in respect to Merseyside – we had very good conversations with (Liverpool Mayor) Joe Anderson and (Liverpool City Region Metro Mayor) Steve Rotheram, the two elected mayors, and as a result of that were able to agree a package of measures and associated support for Merseyside.

“We are having similar conversations with other parts of the country and I hope we will be able to engender the same spirit of non-partisan working with other mayors elsewhere in the Midlands and the North.”

Asked whether more areas could enter Tier 3, Mr Jenrick replied: “No, there are no plans for other parts of the country to go into Tier 3 this week, but this is kept under review and we will keep talking with those local leaders and listening to their views.”

8.05am update: Government may need to ‘go even further’ with lockdown restrictions

The Government may need to introduce even stricter lockdown restrictions to combat a rise in coronavirus cases in high-risk areas, the Housing Minister has said.

Robert Jenrick told Sky News there was “a lot of work to do” in the fight against the deadly virus and warned “we’re going to be living with it for a long time to come”.

He said: “We may have to go even further than what we’ve announced.”

7.46am update: UK unemployment rises to highest rate in more than three years

Economists polled by Reuters had expected the unemployment rate to rise more slowly to 4.3 percent.

The number of people in employment fell by 153,000 in the June-to-August period, the Office for National Statistics (ONS) said.

That was much higher than a median forecast for a fall of 30,000 in the Reuters poll.

The ONS data showed redundancies jumped by a record 114,000 on the quarter to 227,000, their highest level since 2009 when Britain was in the grip of the global financial crisis.