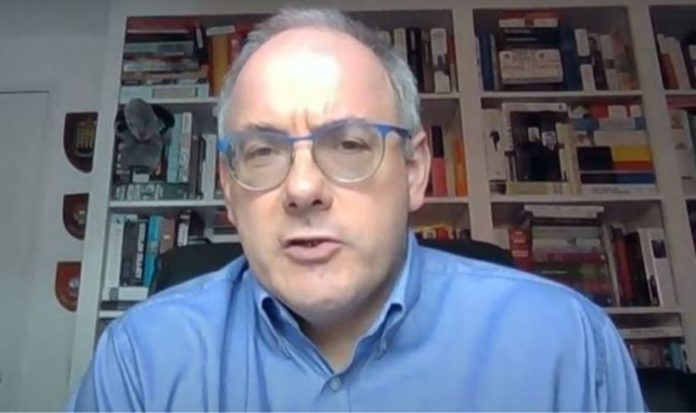 Robert Halfon was repeatedly pressed on the “failure” from Downing Street to protect thousands of university students throughout the UK forced into lockdown because of coronavirus outbreaks. Mr Halfon, who is also Chair of the Education Select Committee, was speaking after hundreds of university students in Manchester were told to isolate after 127 of them tested positive for COVID-19. The Tory MP was first asked by presenter Tom McCloud if universities were prepared well enough to welcome back tens of thousands of students to university as coronavirus cases throughout the UK continue to rise.

He replied: “Reports are clearly indicating there are around 3,000 students in lockdown across the UK from as far as Dundee to Exeter.

“The time has come for the Department for Education, as well as the Chief Medical Officer and Chief Scientific Adviser to give a statement to reassure students and education professionals at university and of course all of the families of students who are at university.”

But the Sky News host quickly asks Mr Halfon: “Where is test and trace to help these students? We are supposed to have a world-beating system in place.”

However, the Conservative MP echoed his previous statement, and replied: “This is why I’m suggesting the Department for Education, Chief Medical Officer and Chief Scientific Officer should set out a statement giving a reassuring message to students, families and education staff at universities, setting out what the test and trace system will be, setting out the safety measures, and setting out what will happen if there is going to be a second spike because we don’t want to see students stuck in halls at Christmas.”

Mr McCloud then demanded to know if there had been a “failure on the part of ministers”, as Chief Medical Officer Chris Whitty and Chief Scientific Adviser Sir Patrick Vallance had warned them in a Sage meeting three weeks ago about the dangers of sending students back too early without systems being in place.

The host continued: “That was more than 20 days ago and there is still no strategy in place. Is that a failure? They warned them on September 3.”

Mr Halfon replied: “We need a clear testing system for universities. It should be efficient and ideally they should be all get a test within 48 hours.”

However, the Sky News host interrupted, and snapped back: “Is it a failure it is not in place for the students? I appreciate we need a system, but is it not a failure the system wasn’t in place before they all came back on campus?”

The Tory MP finally admitted: “There has been a significant issue with testing. Across schools, universities and colleges, testing should be one of the priority areas and the Government have to sort that out.

“I’m not shying away from that. What there needs to be is a statement from the Department for Education, Chief Medical Officer and Chief Scientific Adviser.

“We need to be clear in terms of what is happening with lockdown in halls and guidance on blended online learning and consideration whether students will be given a discount if they don’t have sufficient face-to-face tuition or interaction with their lecturers over the coming months.”

Sky News host Mr McCloud then asked if there has been a “failure on the app side of things?”

The Tory MP replied: “I welcome there is an app but if there needs to be improvements, they need to happen quickly.”

But the Sky News host quickly snapped back: “Why is the app released when some 60,000 people can’t put their results into it? Why is it being released without checking that?”

Mr Halfon replied: “I don’t know the answer to that. I hope the app will be built on in the coming days.”

However Mr McCloud again asks: “Do you think that is a faulure?”

A now clearly flustered Mr Halfon answered: “We can keep on asking in this interview if things have been a failure or not.

“Clearly, things have gone wrong, we are in a national emergency and we are in a very difficult situation in terms of the pandemic.

“Of course it is better things are done in certain ways, at different times, and I’m not denying that for one moment, but the app is there, we need to build on it and it has all the things we require for the testing and tracking system to work efficiently.”