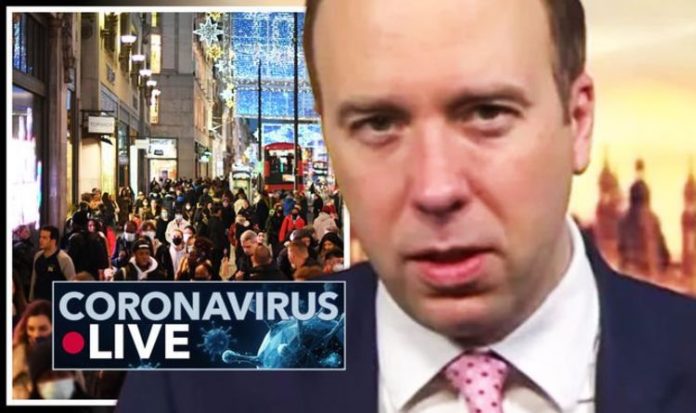 Due to the mutant strain of the virus, cases have increased rapidly in England. Such is the speed of transmission of the new strain, case levels have reached levels not seen during the peak of the virus. Today, Health Secretary, Matt Hancock will update MPs on the situation and has revealed Tier 4 restrictions will be expanded to other areas of the country.

“We’re going to have to extend Tier 4 areas.”

He did insist, however, that there would be no new Tier 5 restrictions announced today.

It is feared if further restrictions are not brought in, the country could see thousands more deaths across the country.

Experts are calling on the Government to stop the reopening of schools next week in order to stop the spread of the virus.

Education Secretary, Gavin Williamson, is expected to make an announcement on the state of schools today.

Following the announcement of the Oxford University drug today, the committee states as many people as possible should be vaccinated.

Although the drugs need to be applied two weeks apart from each jab, the committee has concluded vaccinating more people with the first dose is prioritised above offering others their second dose.

The current recommendation remains that care home residents and workers should be vaccinated first before working down the list.

Professor Wei Shen Lim, COVID-19 Chair for JCVI, said: “The JCVI has considered the safety and efficacy data on the AstraZeneca vaccine and we are pleased to say that it is acceptably safe and effective – as with the Pfizer-BioNTech vaccine.

“For both vaccines, high-levels of protection are evident after the first dose of vaccine.

“JCVI advises priority should be given to the first dose, to maximise the public health benefits in the current situation and save more lives.”