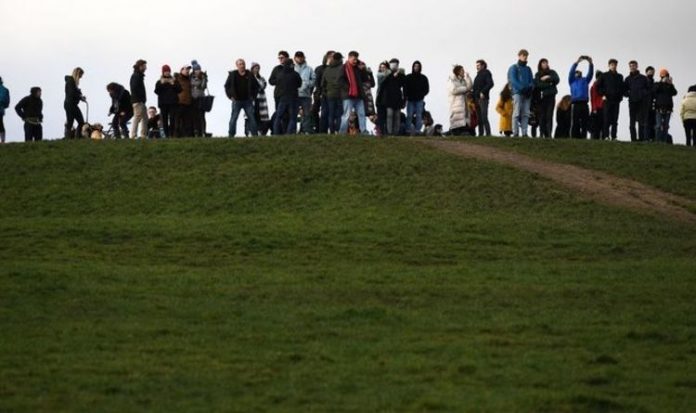 New data from Oxford University’s Covid-19 impact monitor shows the nationwide shutdown is having “a third less impact on movement” than the first one in March. On Sunday Londoners were pictured huddled in crowds at Primrose Hill, with some openly flouting social distancing rules.

And in south London, there were crowds queueing for coffee shops in Clapham, with many failing to keep a distance of 2m from strangers.

There were similar scenes in Borough Market in central London where hundreds of shoppers were brushing shoulders and mingling in the food lovers’ haunt.

The scenes were a stark reminder of the complacency among the public, 10 months after the first lockdown was imposed.

Scientists have warned there can be no early easing of lockdown rules after evidence the mutant coronavirus variant which emerged in the South East of England may be more deadly than the original strain.

Boris Johnson has appealed to people to stay home and follow the rules after he revealed the new variant may be associated with “a higher degree of mortality”.

On Saturday he warned the Government may have to bring in further restrictions on travel following a warning that other new variants found in South Africa and Brazil may be more resistant to the vaccines that have been developed.

His warning followed a briefing by scientists on the Government’s New and Emerging Respiratory Virus Threats Advisory Group (Nervtag) which concluded there was a “realistic possibility” that it was associated with an increased risk of death.

It was already known that the new variant was up to 70 percent more transmissible than the original – leading to a tightening of restrictions across the UK from late December onwards.

In a bid to urge people to take the rules seriously, the public is being shown a set of hard-hitting new adverts warning people to stay home.

The voiceover: “Can you look them in the eyes and tell them you’re helping by staying at home?”

The introduction of the ads comes following a grim week in the UK’s battle against the killer virus.

On Wednesday a further 1,820 people died after testing positive for Covid in the previous 28 days.

This marked the highest every daily death toll recorded by the UK.