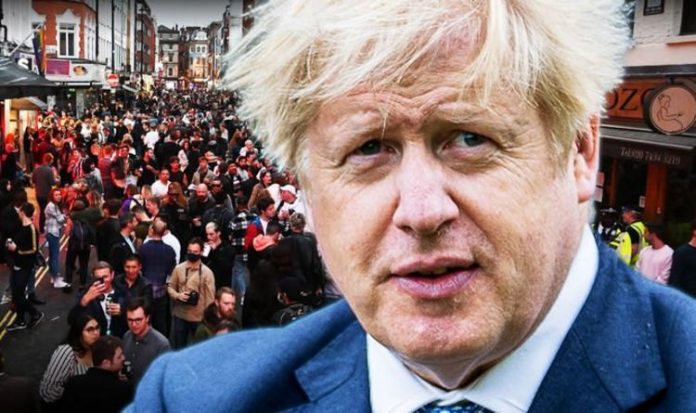 The Government’s 10pm coronavirus curfew has seen large groups of people intermingling en masse, leading to concerns it could exacerbate the spread of the pathogen. Labour’s Manchester Mayor Andy Burnham said the curfew gave an “incentive” for people to “gather in the street, or probably at home”. Mr Burnham added the new curfew saw people “spilling onto the streets at 10 o’clock” suggesting the new rule was “doing more harm than good”.

Up and down the nation there have been 10pm scenes of long queues outside off-licenses, where people dashed to buy more alcohol to carry on drinking at house-parties.

On Saturday night on a street in Peckham, south London, an impromptu cricket match took place after bars and pubs closed at 10pm.

The late-night cricket match outside Peckham Rye station was described as a “sweet and exuberant moment of joy” – despite the dangers it posed to those present.

Speaking to Sky News, James Jones, who caught the game on camera, said: “My guess was that it had recently started as everyone was kicked out of the local pubs and bars.

“I was there for about 10 minutes and it was still going strong.

“Obviously on social media people are projecting all sorts of views on to it.

“Being there, it felt like a very sweet and exuberant moment of joy.

“And we could all do with some more joy at the moment!”

Mr Johnson admitted this was worrying for the hospitality sector that was “just getting back on their feet” after the national lockdown.

READ  Those who stand up to extremism 'vilified' in UK, says commissioner Sara Khan - UK

But, he reiterated: “we must stop the virus being transmitted in bars and restaurants”.

The new restrictions also include the compulsory wearing of facemasks, “except when seated to eat or drink”.

Last week it was announced all pubs and restaurants in central Scotland would close to help fight the spread of coronavirus.

The move was described by First Minister Nicola Sturgeon as a “short, sharp action to arrest a worrying increase in infection”.