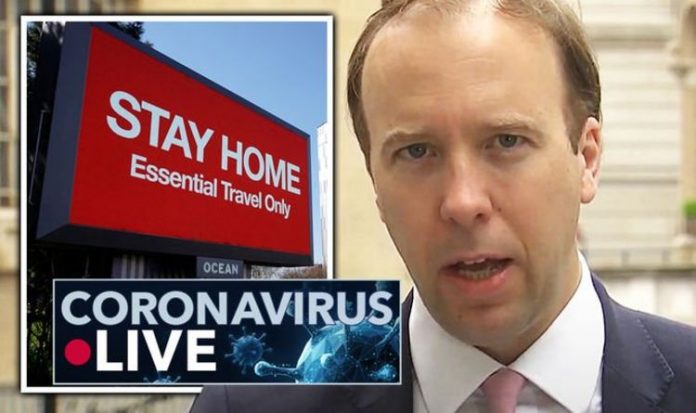 The vaccines produced by Chinese companies Sinovac Biotech and Sinopharm. were put on display at a trade fair in Beijing this week. Crowds gathered around stalls showing off the potential jabs.

The companies hope the vaccines will be approved after phase 3 trials which could take place as early as the end of the year.

A Sinovac spokesperson said the company has already “completed the construction of a vaccine factory” to produce 300 million doses a year.

It comes as more than 27.19 coronavirus cases have been confirmed worldwide.

The global death toll stands at 888,326, according to a Reuters tally.

Matt Hancock has warned of a new nationwide lockdown after a surge in cases (Image: GETTY/SKY)

A further four people who tested positive for coronavirus have died in hospital in England, bringing the total to 29,611, NHS England has said.

The number of coronavirus cases in Wales has risen by 133 to 18,514, Public Health Wales has said.

12.55pm update: Scotland at ‘key moment’ in fight against coronavirus

Nicola Sturgeon has said Scotland is at a “key moment” in the battle against coronavirus amid spiking cases.

Speaking at her daily coronavirus briefing, the First Minister said: “We have a very definite trend at the moment.

“In some ways it shouldn’t surprise us, in recent weeks we have opened up most of our economy.

Scotland has recorded 146 new coronavirus cases, taking the overall total since the start of the outbreak to 21,543.

11.35am update: 300 urged to self-isolate after charity football match

The match was held at Burnside Working Men’s Club, in Fencehouses, County Durham on August 30.

The location is close to the border with Wearside, so Durham County Council has been working with counterparts at Sunderland City Council, as well as Public Health England, to manage the response.

Thirty pupils in Year 7 at Ysgol Bro Edern in Cardiff have been asked to self-isolate for 14 days after a student tested positive for coronavirus.

Head teacher Iwan Pritchard said: “Following the confirmation that a pupil at the school has tested positive for Covid-19 we acted as quickly as possible, in conjunction with Public Health Wales, to contact all pupils within the pupil’s class bubble.

“As a precaution, additional cleaning, on top of the daily cleansing regime we have in place, has also been completed.

“Due to the procedures we have in place, restricting contact between different classes and logging seating plans of all lessons, we have been able to limit the numbers of pupils needing to self-isolate and there is no need for parents or pupils that have not been contacted to self-isolate or be unduly concerned.

The country has reported a total of 196,989 infections since the start of the pandemic and the death toll stands at 8,130.

9.20am update: Hancock admits daily rise in cases is ‘concerning’

Health Secretary Matt Hancock told LBC: “The rise in the number of cases we have seen in the last few days is concerning.

“It is concerning because we have seen a rise in cases in France, in Spain, in some other countries across Europe – nobody wants to see a second wave here.

“It just reinforces the point that people must follow the social distancing rules, they are so important.”

When asked if people were not following the rules he added: “We certainly see cases where they are not, and then we take action.”

Russia has recorded 5,185 new coronavirus cases, pushing its total since the beginning of the outbreak to 1,030,690, the fourth largest in the world.

India has overtaken Brazil to become the country with the second highest number of coronavirus cases after the US which has the most.

The country has recorded 90,082 new infections, taking its total to 4.2 million.

7.50am update: Labour demands answers from Hancock after cases surge

Labour has called on Health Secretary Matt Hancock to explain how cases of coroanvirus will be reduced after nearly 3,000 new infections were reported on Sunday.

He said on Sunday: “Today’s increase in coronavirus cases is deeply concerning and a stark reminder that there is no room for complacency in tackling the spread of the virus.

“This increase, combined with the ongoing testing fiasco where ill people are told to drive for miles for tests, and the poor performance of the contact tracing system, needs an explanation from ministers.

“Matt Hancock must come to the House of Commons to set out what is being done to get testing back on track and bring case numbers down.”

7.25am update: Five teachers test positive for coronavirus at school

Five members of teaching staff at a school in Suffolk have tested positive for coronavirus, with the academy closed on Monday on the advice of Public Health England.

Two other members of staff at the Samuel Ward Academy in Haverhill are waiting for their test results.

The school said in a statement that the closure was a “precautionary measure” and it hoped to reopen on Tuesday.