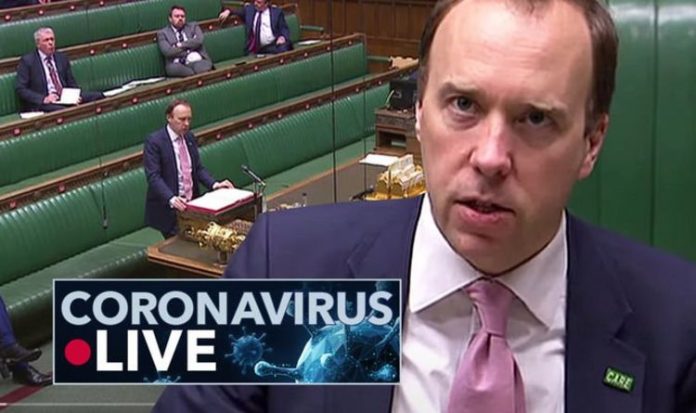 Matt Hancock was blasted by two leading academics earlier this week for failing to have a “basic understanding of infectious disease epidemiology”. Now a doctor has urged the Health Secretary to resign, as he states Mr Hancock is failing to protect the British public.

Professor Angus Dalgleish, a consultant medical oncologist at the Cancer Centre London, has launched a blistering attack on the Health Secretary after he dismissed the possibility of COVID-19 herd immunity in the Commons earlier this week.

The doctor pointed out he is among the 35,000 scientists and doctors who has signed the Great Barrington Declaration (GBD) in favour of herd immunity, but insists this does not cloud his judgement.

He said: “But when I say that it is time for Mr Hancock to resign I do so not in a fit of pique at having my clinical and scientific judgment questioned.

“I say it because of his apparent inability to assess the medical evidence that is mounting against lockdowns, their role in destroying economies and causing untold misery to citizens as a result, blighting prospects for the young – and costing tens of thousands of lives.”

Professor Dalgleish also pointed out the Health Secretary “presided over the care home Covid crisis, a shortage of protective equipment and the lamentable NHS test and trace programme”.

He also criticised Mr Hancock for decisions made during the first national lockdown, which saw GP surgeries close and the public unable to see a doctor for vaccinations and cancer screenings.

He said: “For this deadly omission alone, Mr Hancock would be wise to depart public life before these numbers are tallied and the blame is apportioned.”

Ian Blackford told the BBC Radio 4 Today programme: “We of course have the opportunity to put in place appropriate public health measures.

“What we can do, if necessary, is say that people should not travel from hotspots, whether they should be from in Scotland or people coming to Scotland from other parts of the United Kingdom.

“But that will be done on an evidence-based approach where we think it’s appropriate to protect the people in all parts of the country from people travelling where it’s not necessary.

“When people have to travel for business, for work, and so on – essential journeys – they will still be allowed, but what we’re talking about is non-essential journeys, where it’s appropriate to do that.”