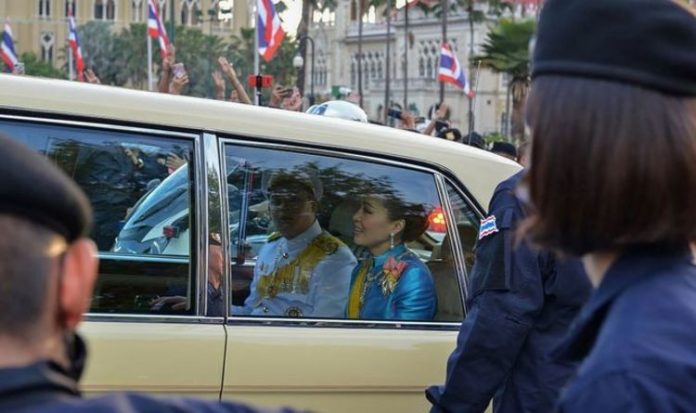 The demonstrations in Thailand follow months of tensions in the country, with Government critics calling for the nation’s constitution to be rewritten and for a reform of the monarchy. It is understood the largely student-led protesters are calling for the country’s king, Maha Vajiralongkorn, to have less power.

Members of the country’s Royal Family were confronted by protesters in Bangkok yesterday, who were restrained by police.

The royals were travelling in a group of vehicles known as a motorcade at the time.

One car contained Royal Family members Queen Suthida and Prince Dipangkorn Rasmijoti. Another was reported to be carrying the king himself.

The spokesman added “those who acted in a way that defames the monarchy” would face legal procedures, according to AFP news agency.

Police had attempted to clear the route the royal procession was due to take.

Indeed, people in Thailand who insult the country’s monarchy can face up to 15 years in jail in what is one of the strictest laws of its kind anywhere in the world.

Article 112 of the country’s criminal code states a person who “defames, insults or threatens the king, the queen, the heir-apparent or the regent” can receive jail time.

According to the BBC, three protest leaders were arrested by police earlier this morning.

It is thought the recent incident is the first time Thailand’s royal family have come face to face with the demonstrations.

The pro-democracy movement has also sparked counter-protests from pro-royalists, with whom the demonstrators clashed earlier this morning.

English language Thai newspaper DT Next said the protesters have broken a ‘taboo’ by calling for royal reforms in the country.

It added some of the demonstrators had tried to resist the police pushback with barricades, though these quickly failed.

Thailand’s new state of emergency now means there is a ban on large gatherings, introducing a limit of just four people.

There is also a new rule which restricts what media can publish. Specifically, it prohibits news which would cause “misunderstanding that will affect national security or peace and order”.

Protests in the country this year are thought to have been fuelled in part by the disappearance of Thai pro-democracy activist Wanchalearm Satsaksit in June. He was in Cambodia when he was last seen.