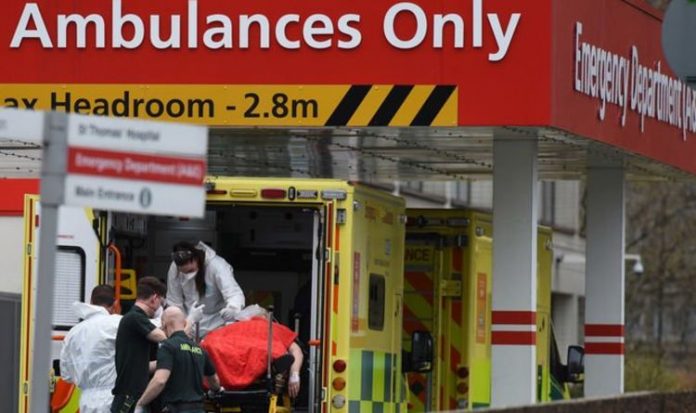 John Edmunds, a professor at the London School of Hygiene and Tropical Medicine, warned unless further measures are imposed across England, there will be higher numbers of new infections every day. He said this would put the NHS under strain and the death toll would shoot up.

Warning MPs yesterday, Mr Edmunds said: “If you look at where we are, there is no way we come out of this wave now without counting our deaths in the tens of thousands.

“We are already at the point, or getting close to the point, where the health service will be under strain in the next few weeks.

“And even if we stop things now, cases and hospitalisations will continue to go up for the next 10 days, two weeks, because they are already baked into the system.”

Mr Edmunds – who sits on the government’s SAGE committee – added if nothing is done the north-west England could face “very severe numbers of cases” around Christmas and New Year.

Liverpool, Lancashire and Greater Manchester have all been placed into the government’s Tier 3 lockdown.

This means pubs and bars have closed unless they serve meals and there is a ban on households mixing both indoors and outdoors in a bid to curb the coronavirus pandemic.

When asked about the government’s tier system, Mr Edmunds admitted it was a strategy he would follow.

He added: “What that means is we all end up at a high level of incidence where hospitals are really overstretched and we have large numbers of deaths.

“That for me is the logical conclusion of the strategy we are following – and I would not follow that strategy.”

It is understood Chancellor Rishi Sunak is set to announce extra help for pubs and restaurants in areas under Tier 2 coronavirus restrictions, such as London.

Adam Marshall, director general of the British Chambers of Commerce, told The Telegraph: “Quite a lot of businesses out there are stuck between a rock and a hard place.

DON’T MISS
Coronavirus vaccine: UK could soon be in ‘reasonable position’ [REVEAL]
How much money has the Government given Tier 3 areas? [INSIGHT]
Yorkshire resident, 83, in furious rant on Tier 3 rules [COMMENT]

“They are facing closure through lack of demand rather than an official order.

“The priority is to ensure that the support on offer is commensurate with the impact of restrictions.”

A further 191 deaths were confirmed within the last 28 days of a positive test result.

UK has the highest death toll in Europe (Image: Getty)

Other countries have also seen a rise in cases with Spain becoming the first western European country to exceed one million infections.

Figures from the Robert Koch Institute for Infectious Diseases recorded 11,287 new cases with the death toll increasing by 30 bringing the total to 9,905.

8am update: Minister for crime and policing says people need to “grit their teeth” to get through the virus

Minister for crime and policing Kit Malthouse said that as cases rise people had to “grit their teeth” and do their best to get through the current wave of the virus.

When asked on BBC Breakfast if people were fed up with restrictions, he added: “I think everybody is fed up, we are all fed up, nobody is enjoying this experience.

“But in truth this is the moment, as we see the numbers mounting, that we all have to grit our teeth and do our best to get through it.”

Mr Malthouse said the majority of people were complying with the rules and the number of fines issued by police for breaches was “tiny really”.

He added: “What we are seeing across the country, the polling is telling us there’s strong support for the measures being put in place and we are seeing high levels of compliance.”