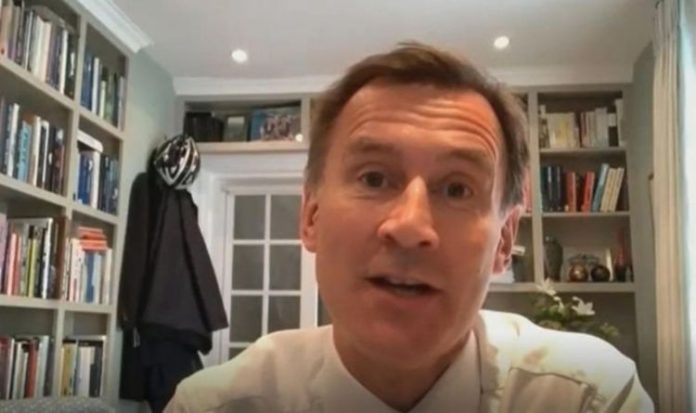 The weekly tests are a bid to stave off a second wave of the virus in autumn. The proposal comes after Health Secretary Matt Hancock has announced an extra £500 million has been committed to scale up coronavirus testing. His announcement came along with a community trial in Salford for weekly repeated tests. It comes as children across the country return to schools amid fears of a second wave of the virus.

Mr Hunt, former Health Secretary and now chair of the health select committee, has said the measure should be embraced nationwide.

He said: “I would really want to expand the whole testing programme so we can almost get to a point where we are testing the whole population every week.”

Mr Hunt also said an intermediate step could be to test NHS staff and teachers weekly “so people can be absolutely confident when they’re using hospitals, when they’re sending their kids to school, that they are coronavirus-free zones”

He added: “I think this mass testing could potentially be linked to an app on your phone so that you could show people on your phone the last time you got tested.”

Mr Hunt went on to suggest mass testing was the key tool to prevent the spread of coronavirus before a vaccine could be developed.

The committee chair detailed his views on how testing can impact lockdown policy to ITV’s Acting Prime Minister podcast.

He said: “In fact, if you had population testing there’s no reason why you, theoretically, would need to have social distancing.

You could pretty much carry on life as normal because you’d just know that everyone you’d mix with had been tested very, very recently.”

The testing trials come as millions of students return to school after the March 23 lockdown.

Education Secretary Gavin Williamson claimed he is “confident” it is safe for children to make a “successful return” to school.

Scotland’s health officials have reported evidence of coronavirus spreading in two Glasgow schools, with 37 students testing positive out of 29,500 tested.

It has also reported 41,602 deaths from the virus according to Johns Hopkins University.