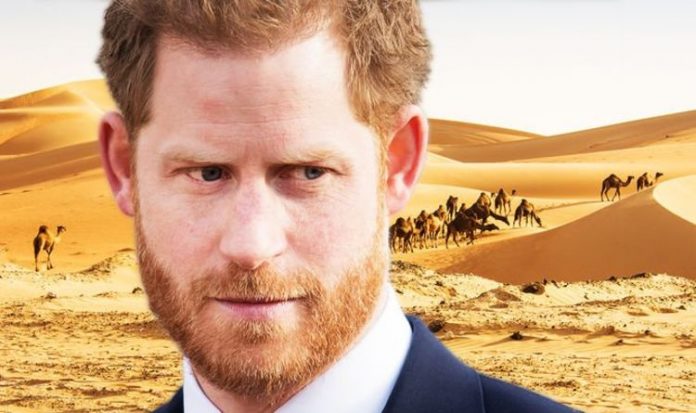 The Duke of Sussex has agreed to be the patron of the latest expedition planned by Walking with The Wounded, which will see six armed forces veterans make the difficult journey across the desert. The charity’s CEO Ed Parker revealed that Harry has been invited to join them on their expedition. However, it is uncertain at the moment, with the coronavirus crisis, whether the Duke will be able to go.

Mr Parker explained that Harry has been the patron of all their expeditions since 2010 and has even joined them on several trips, including one to the North Pole and one to the South Pole.

An army veteran himself, Harry is deeply passionate about helping those who have been wounded or face mental health struggles after leaving the armed forces.

Walking with The Wounded is a British charity that helps injured former servicemen and women in their career transition from military to civilian life, helping over 1900 people last year with mental health and employment support.

The Walk of Oman aims to raise money, as well as awareness of the issues faced by veterans.

Prince Harry may go to Oman for the expedition (Image: GETTY)

Prince Harry on the Walking with the Wounded trip to the South Pole (Image: GETTY)

Walking with The Wounded is partnered with the Invictus Games, an international multi-sport event Harry founded and runs, in which injured or sick armed service personnel and veterans compete in nine adaptive sports such as wheelchair basketball.

One of the people set to embark on the expedition, former RAF soldier Andy Phillips, has even competed in the Games before.

The Walk of Oman, of which Harry is Expedition Patron, is taking place over three weeks between November 20 and December 11 and will raise money for the charity’s work helping armed forces veterans with complex needs.

Mr Parker said: “By giving his patronage to the expeditions, [Harry] is very much acknowledging their value and he will contribute where he can to the overall success of it.

Prince Harry poses with children during the Walk of Britain with Walking with The Wounded (Image: GETTY)

“If he can take part, he does, and that gives him the opportunity to learn more about the men and women who are taking part.

“He did a video online about the expedition a while ago; we’re launching next week and we hope there will be another video.

“We’ve invited him to Oman ‒ the world is a slightly funny place at the moment with everything going on with COVID, so we can’t be sure whether he is going to make it, but I’m sure if he can he will.”

The expedition will see the team of six cross part of the Empty Quarter, the world’s largest sand desert, with the walk concluding on Oman’s Armed Forces Day.

The trek is 400km long, and the veterans will be carrying a 300kg trolly with all their supplies in temperatures of around 32 to 35 degrees celsius.

One of the veterans taking part in the expedition is Dave Adams, who served in the Royal Electrical and Mechanical Engineers for 13 years.

Mr Adams sought help from Walking with the Wounded, among other military challenges, when struggling with PTSD in 2017, before he was discharged from the army.

Now, he wants to help raise money and awareness of the charity.

He explained that there are “a plethora” of things the charity can do and urged those who might benefit to go to the Walking with The Wounding website.

He added that having Harry as a royal patron has been “absolutely fantastic”, especially because, as a veteran himself, he can really connect with them and understand what they are going through.

He said: “[Harry] is there as the spearhead for all this and he’s been with Walking with The Wounded since its inception.

“To have the Duke of Sussex on board is absolutely fantastic and something to be proud to be a part of and knowing the support comes from his level is unsurpassed.

Prince Harry at the Walking with The Wounded hub in Manchester (Image: GETTY)

“It means that you’re not fighting a battle without people behind you. That’s something that is very, very valuable to us.

“So it’s having someone who knows what you’re going through as the top level of support is invaluable.”

This heartwarming testimony will fly in the face of those who have accused the Duke of Sussex of abandoning his patronages.

Both Harry and Meghan kept all their patronages after stepping down as senior royals and plan to continue their involvement with these organisations in the future.