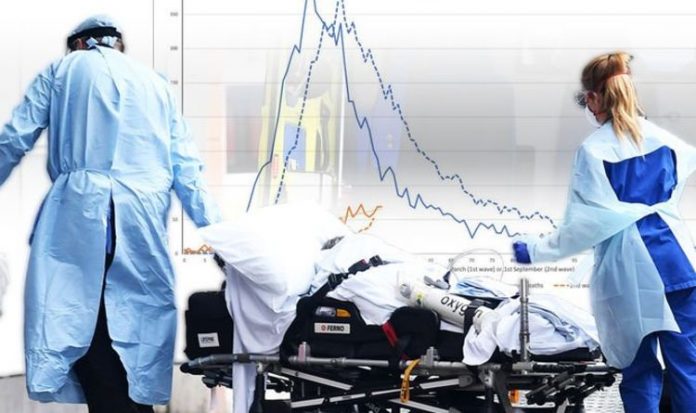 The analysis of more than 21,000 admissions, led by the University of Exeter, found high dependency unit admissions and intensive care admissions plummeted between March and the end of June. The findings, which also involved the University of Warwick and was supported by The Alan Turing Institute, revealed from late March, 26 percent of people admitted to high dependency units and 41 per cent of people admitted to intensive care died from COVID-19. In June, these figures dropped to just seven percent and 21 percent respectively.

Dr Bilal Mateen, of the University of Warwick, said the fall in the number of people dying from COVID-19 is “clearly a step in the right direction”.

But he urged people against becoming “complacent”, explaining why death rates in hospitals were perhaps so high at the peak of the first wave of coronavirus.

Dr Mateen said: “The reduction in the number of people dying from Covid-19 in hospitals is clearly a step in the right direction, but it’s important that we do not become complacent as a result.

“It’s possible that the higher death rates at the peak of the pandemic are in part because hospitals were so overcrowded at that point.

“Even at the lowest point, nearly a quarter of admissions to intensive care were still dying – that’s a huge number of people, and we have to do all we can to control the spread of the virus and keep hospital admissions as low as possible.”

Now a new graph showing intensive care admissions and deaths from both the first and second wave of coronavirus infections has helped throw more light on the latest findings.

A separate orange line shows intensive care admissions during the second wave of infections, with another orange dotted line alongside this about to pass the first line.

READ MORE: Queen news: Palace hopes for Rule of Six to be scrapped for Christmas

“In May 50 percent of ‘COVID’ deaths were outside of hospital (mostly care homes).

“Now it is 80 percent in hospital. Yet not enough in ITU to account for it.”

On Tuesday, the latest figures from the Office for National Statistics (ONS) showed the number of weekly registered deaths involving coronavirus has risen by more than half in seven days.

In the week ending October 16, there were 670 deaths registered in England and Wales which mentioned “novel coronavirus”.

There were 438 deaths involving COVID-19 registered during the previous week, meaning there has been a 53 percent increase.

It is the sixth consecutive rise and the highest number of registered deaths involving Covid-19 since the week ending June 19.

From the latest deaths, 521 occurred in hospitals, 106 in care homes, 33 in private homes, six in hospices, two in other communal establishments and two elsewhere.

The total number of deaths involving coronavirus now stands at more than 61,000, while 59,927 deaths have so far been registered in the UK where Covid-19 was mentioned on the death certificate.