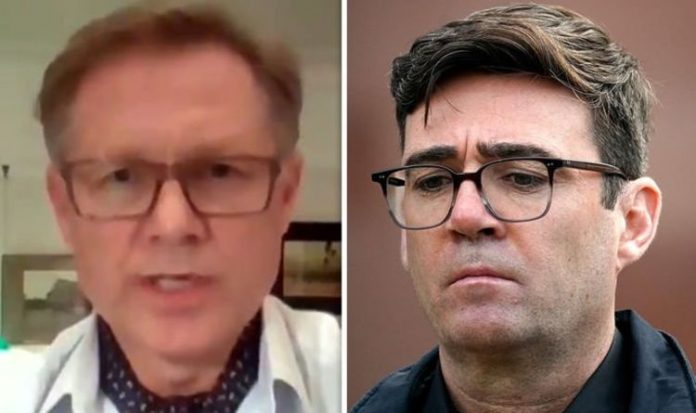 This lockdown was resisted by Mr Burnham who demanded more money for the region to help cover the costs. However David Morris, Tory MP for Morecame and Lunesdale, hit back accusing local leaders of “playing politics” with the pandemic.

On Tuesday Boris Johnson announced with “regret” he was imposing tier three restrictions on Manchester without local support.

The new rules, which come into effect on Friday at 00:01 BST, mean household mixing isn’t allowed inside or outside.

Pubs and bars are also being forced to close unless they also serve substantial meals.

Mr Johnson argued “not to act now” would endanger the lives of Manchester residents.

However Mr Burnham claimed the financial package offered by the Government would not “protect the poorest people in our communities”.

Appearing on BBC Newsnight Mr Morris blamed Mr Burnham and other local leaders for the impasse.

He said: “At the end of the day it’s about treating everybody the same and what this is about is saving lives.

This deal was offered to local leaders but rejected as insufficient.

Instead Greater Manchester politicians demanded a package of at least £65m.

Labour is forcing a Parliamentary vote later today on the new measures.

Mr Burnham tweeted: “Anywhere could end up in Tier 3 this winter.

“That’s why our fight was always everyone’s fight.

“We’re so grateful for the messages of support from across the country. Thank you.

“This is now rightly going before Parliament tomorrow. Please ask your MP to vote for fairness.”

On Thursday the UK confirmed the deaths of another 241 people suffering from coronavirus, the highest 24-hour figure since the spring peak.

Another 21,000 cases were recorded across the country.

The UK has recorded more coronavirus cases than any other European country.