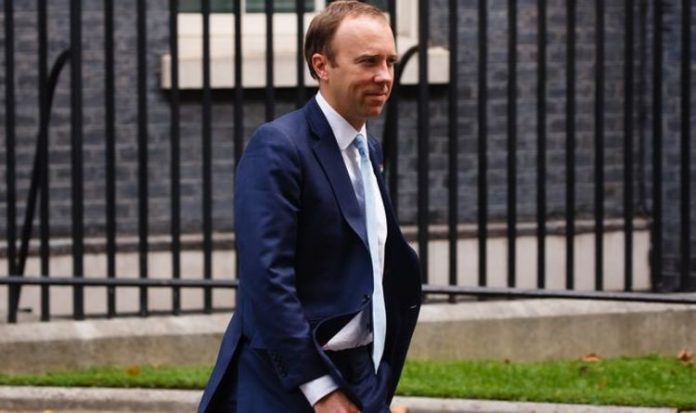 A senior Tory MP told the Mail on Sunday the Health Secretary had remained in a Commons bar until ‘at least 10.25pm’ on one occasion earlier this week, the paper claimed.’ A spokesman for Mr Hancock strongly denied the allegation.

He said: “Together with all hospitality venues, they should close at 10PM.”

The Prime Minister added: “We must stop the virus being transmitted in bars and restaurants”.

However before the vote the Health Secretary reportedly made a joke that appeared to be a jab at technical failures by Public Health England.

According to the Mail on Sunday Mr Hancock said: “The drinks are on me, but Public Health England are in charge of payment methodology so I will not be paying anything.”

This week, it was revealed Public Health England failed to report almost 16,000 cases of coronavirus in its daily figures between the dates of September 25 and October 2.

The missing data is also thought to have disrupted the test and trace system, meaning some people who had come into close contact with individuals with positive cases were not informed by PHE.

The technical error was due poor use of the Microsoft Excel software which meant computers were not able to store as much data as the software usually allows.

Authorities within Parliament have said MPs may not purchase any alcohol after 10pm, even though Commons bars were initially thought to be exempt because they were classed as “workplace canteens,” The Times said.

Meanwhile, the government is facing opposition from regional mayors in the north of England as new, stricter rules to limit the spread of coronavirus are expected to be announced on Monday.

The new rules could shut down pubs in some areas on England based on a new three-tier system.

Chancellor Rishi Sunak has said the government will cover 67 percent of the wages of employees for any businesses which are shut down as a result.

Manchester mayor Andy Burnham has criticised the announcement, calling for a return to 80 percent wage support scheme offered during the UK’s first lockdown.