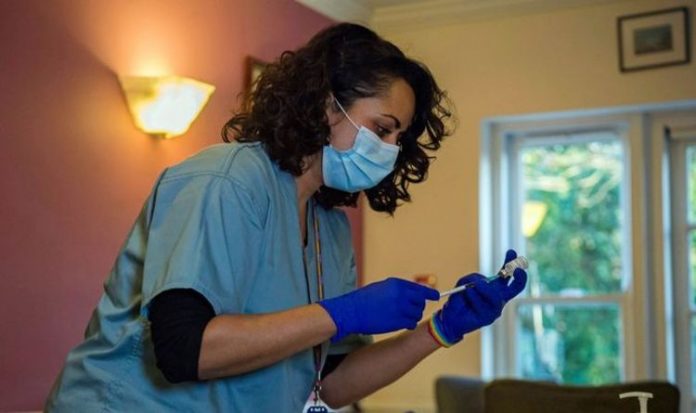 Recently, the NHS confirmed every care home resident in England – with a few exceptions – has been offered a Covid-19 jab. In addition, the NHS set a new record for the amount of doses delivered in one day over the weekend.

However, Fiona Carragher, a director at the Alzheimer’s Society, said in a statement yesterday that while the care home milestone was “great” news, there is still the question of when care homes can reopen for visits.

Under current plans, a second vaccine will be delivered to people up to 12 weeks after the first, which is a bigger gap than initially thought, the BBC reports.

Ms Carragher said in a statement: “The most pressing question now is how and when can care homes restart safe, meaningful visits.

“Combined with PPE and testing, isn’t one jab enough? If not, what else needs to be in place?

“Another 12-week wait is unacceptable for people dying of loneliness. We need a swifter rollout of the second jab, as well as ensuring all staff receive it.”

She added “at least 70 percent” of care home residents have dementia, and said they are “losing their connection to the world”.

However, she warned “at the moment it’s too soon” for indoor visits to go ahead.

She also said she is “not expecting” the rollout of second jabs to be sped up, suggesting priority is going to the first one.

According to figures published yesterday by the National Immunisation Management Service (NIMS), over 8.5 million people have been given a vaccination by the NHS in England.

Of this number, 460,907 vaccinations were a second dose. The Midlands has so far received the largest amount of jabs.