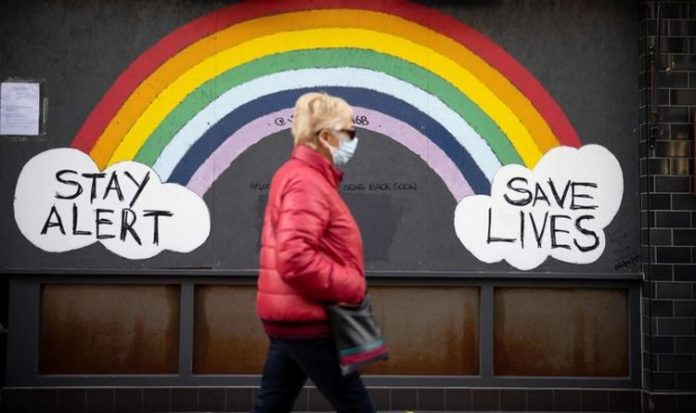 It is thought as many as six million additional people have been placed under the Government’s toughest coronavirus rules. The measures mean that all non-essential shops, hairdressers, gyms and more will be forced to close.

On Christmas Day, the UK recorded 32,725 new cases of coronavirus and 570 deaths within 28 days of a positive test.

Within the past seven days, 244,146 people had tested positive for the virus and 3,654 had died. Both figures represented marked increases from the seven days prior.

Altogether, this morning’s restrictions mean more than 40 percent of the UK population are now in Tier 4, the BBC reports.

While many areas are being placed into Tier 4, others are going into Tier 3 from Tier 2 (Image: Tolga Akmen / AFP / Getty)

According to the Government’s guidance, people living in Tier 4 areas must stay at home unless they have a ‘reasonable excuse’ for leaving.

However, such excuses include food shopping, unlimited exercise, going to school, or to meet one other person outdoors.

In addition, many areas that were not previously in Tier 3 now will be.

Cornwall and Herefordshire – which until now remained one of the few remaining places in Britain where hospitality venues could operate essentially as normal due to Tier 1 measures – are moving into Tier 2.

Herefordshire enjoyed less than a week of Tier 1 measures, having been downgraded to Tier 1 on December 19.

A rise in cases saw the decision reversed. It was welcomed by Dr Rebecca Howell-Jones, the region’s director for public health.

She said: “We know this decision by government has not been taken lightly, but it is vital that action is taken quickly to help suppress transmission of the virus.”

England is not the only region in the UK to be placed into tougher measures today.

Northern Ireland has this morning started a six-week national lockdown, in which even essential shops will have to close by 8pm during the first week.

Michelle O’Neill, Deputy First Minister, said: “The situation in terms of COVID is quite dire and we saw images this week that we never want to see repeated again.”

At one stage, patients were being treated in the car park of Antrim Area Hospital.

Meanwhile the Queen, in her Christmas message yesterday, spoke of the nation’s frontline services, noting “we owe them a debt of gratitude”.

The monarch added: “We continue to be inspired by the kindness of strangers and draw comfort that – even on the darkest nights – there is hope in the new dawn.”