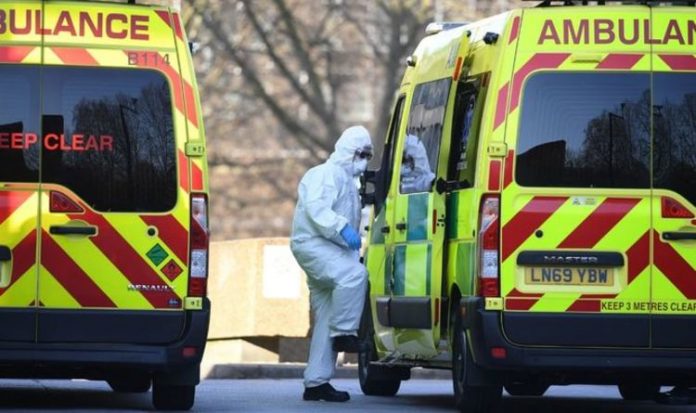 On Tuesday medics claimed they had begun planning to create makeshift tents in an attempt to cope with the inflow of more patients, according to reports. They also warned that patients were being moved more than 65 miles to the nearest hospitals that have intensive care capacity.

This week official figures revealed that the number of coronavirus patients in hospitals across England had surpassed its peak in April during the first wave of the virus.

This beat the previous record on 12 April of 18,974 patients in NHS hospitals with the virus.

On Monday, the UK recorded its highest daily increase in COVID-19 cases since the start of the pandemic with 41,385 new cases.

The UK also reported 414 new deaths related to the coronavirus on Tuesday.

Although hospital admissions and cases are rising, the number of patients on ventilators seems to be lower than in the first virus wave.

According to the Daily Telegraph, the number of patients on ventilators is 40 percent lower than in the initial wave.

NHS England has insisted that the seven Nightingale facilities build across England are either treating patients or ready to support the NHS.

Simon Walsh, an emergency medicine consultant in north-east London, warned staff that they are working in “major incident mode”.

He has urged the Government to create a “coherent plan” to cope during the coming weeks.

Dr Walsh also added that trusts are “having crisis meetings, they’re calling on staff to come in to work if they’re able to on their days off”.

He told the Telegraph: “They are dealing with queues of ambulances outside many emergency departments, often with patients sat in the ambulances for many hours until they can be offloaded into the department because there simply isn’t any space to put them in.”

Dr Walsh added how some hospitals are considering setting up tents normally used for dealing with a “sudden surge of patients from a major incident” such as a terror attack because emergency departments do not have the capacity.

In a statement, a spokesperson for NHS England said: “The Nightingale in London remains on standby and will be available to support the capital’s hospitals if needed.

“In the meantime it is vital that Londoners do everything possible to reduce transmission and cut the number of new infections which otherwise inevitably result in more avoidable deaths.”

The comments came after reports that some vital equipment to treat patients including beds and ventilators had been removed from the capital’s Nightingale facility.