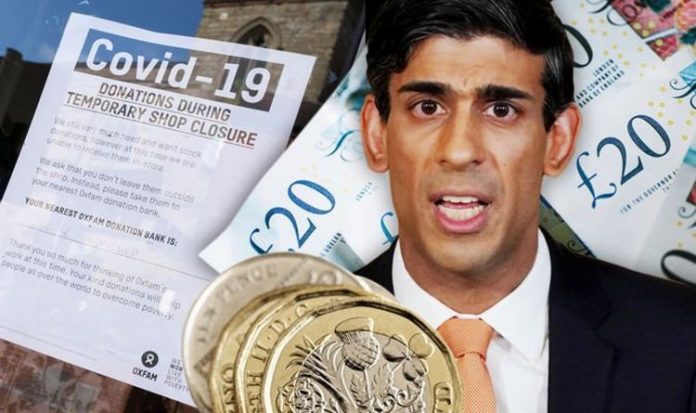 Yesterday, Prime Minister Boris Johnson announced the country will go into a second national lockdown from Thursday as cases of the virus continue to rise to alarming levels.

But the restrictions could fuel a double-dip recession, economists have now predicted.

During the first lockdown back in spring, the economy shrank by 20 percent in April as shops and businesses were forced to close.

But as the Prime Minister announced further drastic measures to curb the spread of the virus, a leading analyst believes the figure could drop by a further 10 percent as a result of the new restrictions.

Gerard Lyons, economic adviser to Boris Johnson when he was Mayor of London, said: “The economy will contract and while not by as much as it did in the initial lockdown, it will still be significant, possible as much as 7.5 – 10 percent.

“I expect unemployment to rise from 1.52million to 3million and large swathes of firms to be left nursing debt that will inhibit their ability to recover.”

Paul Dales, chief UK economist at Capital Economics, added he expected the UK GDP to move in November but was only predicting a monthly fall of five percent.

He said: “The economy is likely to how zero growth or even have a small decline in the fourth quarter o the year.

“This has all the signs of a double-dip recession.”

Back in August, the economy crumbled into the worst recession after shrinking by a record 20.4 percent in just three months.

At the time Chancellor Rishi Sunak warned “hard times are here” as the UK entered a recession for the first time in 11 years.

At the start of the pandemic, Mr Sunak was widely praised for introducing the furlough scheme to help those whose jobs were affected by the lockdown.

While the scheme was initially praised, many warned the vital service should not be extended.

Richard Skellett, of charity Digital Anthropology, told Express.co.uk: “Furlough absolutely should not be extended and is just delaying the pain.

“The biggest issue we have going forward is uncertainty.

“Furlough is not an answer to uncertainty and does not solve the problem at root cause.

“Individuals and organisations need to focus on root cause solutions in the future of work and future of business area.”

However, while announcing the latest measures, Mr Johnson confirmed the furlough scheme will be re-introduced as the country braces for a four-week lockdown.

Mr Johnson said: “I’m under no illusions about how difficult this will be for businesses which have already had to endure such hardship this year and I’m truly, truly sorry for that.

“And that’s why we’re going to extend the furlough system through November.

“The furlough scheme was a success in the spring, it supported people and businesses in a critical time.

“We will not end it. We will extend it further until December.”

Pubs, bars, non-essential jobs and gyms will now all have to close again as the lockdown comes into effect from Thursday.