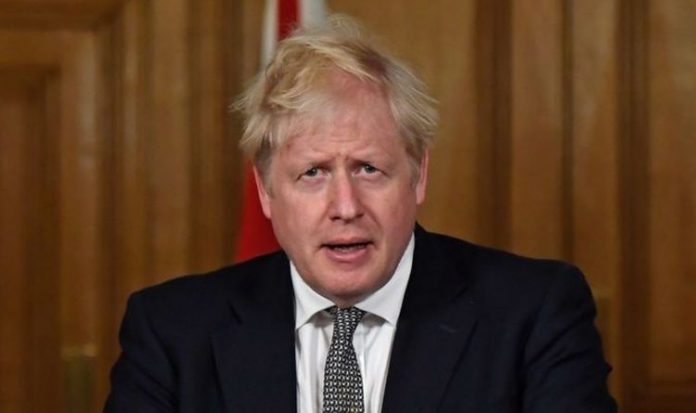 Boris Johnson announced that Britain will be entering another lockdown on November 5 as the second coronavirus wave has seen cases drastically increase. Professor Douglas McWilliams, founder of the Centre for Economics and Business Research, has predicted that this year’s Christmas spending will plummet with dramatic effect.

Mr McWilliams told : “I’m afraid it’s going to be a bleak Christmas for the economy and it will have devastating effects.

“The retail sector will be particularly hard hit as sales are about 50 percent higher than the monthly average at this time of year. The impact of reduced Christmas spending will be huge.

“If the office bash is cancelled, people won’t be buying a new party frock.

“We’ll be spending less money on food and drink because we cannot have so many friends and family over. And if you’re not going visiting, perhaps people will cut back on presents.”

Chancellor Rishi Sunak will come under further pressure under the new lockdown.

Mr Sunak will face demands from struggling businesses but also his VAT takings will be knocked due to the expected drop in Christmas spending.

Economists have warned that the country may find it harder to recover from the second lockdown.

Julian Jessop, an independent economist, told that there is increasing evidence that economic and social damage outweighs the benefits of major restrictions.

On Saturday, the Department of Health said there were 326 more deaths related to the coronavirus in the UK which was 52 more than reported on Friday.

Boris Johnson insisted the new lockdown for England is being put in place to prevent a “medical and moral disaster” for the NHS.

During his Downing Street conference on Saturday, he said: “Christmas is going to be different this year, perhaps very different, but it’s my sincere hope and belief that by taking tough action now we can allow families across the country to be together.”

Economists previously warned that tough restrictions could possibly be counter-productive as closing pubs or enforcing curfews may cause more people to socialise in houses with fewer safety precautions.

Professor David Paton, chairman of industrial economics at the University of Nottingham, told : “Governments tend to overestimate their ability to control the virus and hugely underestimate the cost of the restrictions they impose.

“Many restrictions are arbitrary and ineffective. It is almost as if they feel they have to be seen to be doing something.

“It’s understandable the Government is worried about pressure on hospitals, but there is no evidence a 10pm curfew or only letting people in pubs and cafes if they buy a full meal will be effective.

“Those measures will, however, lead to huge costs, for the economy with businesses and jobs being destroyed but also in terms of social isolation and loneliness. It is time for the Government to change tack.

“We need to find a way to live with the virus, to protect the vulnerable but open up society.”