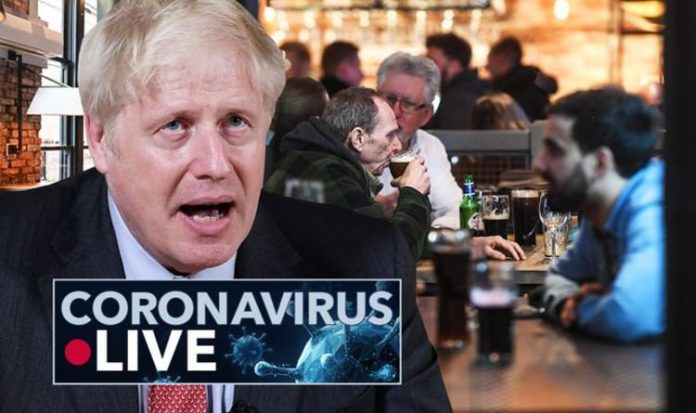 Figures from Test and Trace showed 51,475 people tested positive for COVID-19 between September 24 and 30, compared to the previous week. This marked an increase of 56 percent and comes as the Government is planning on shutting down bars and restaurants in hotspots in the North. The grim figures coincided with the release of data from the Office for National Statistics (ONS) which showed in the first eight months of the year there were three times as many coronavirus deaths compared with deaths from the flu or pneumonia.

Between January and August there were 48,168 deaths from COVID in England and Wales.

During the same period there were 394 deaths from flu recorded and 13,619 from pneumonia.

The Prime Minister is set to announce a new raft of restrictions for COVID-19 hotspots this week before taking effect on Monday, reports suggest.

On Wednesday Nicola Sturgeon announced a two-week closure of pubs across central Scotland including Glasgow and Edinburgh in a move seen as a “circuit breaker” aimed at slowing the spread of the virus.

Boris Johnson is set to follow her lead, the Sun reports, when he orders the shutdown of hospitality venues in parts of the North, including Manchester and Liverpool.

Schools, universities, shops and offices will remain open under the plans.

Ahead of Mr Johnson’s announcement, a new study has shown how short-term lockdown could backfire on authorities by resulting in a higher coronavirus death toll.

Boris Johnson is expected to order a shutdown of bars and restaurants in the North of England (Image: GETTY)

Researchers at Edinburgh University studied Report 9 – the report by Professor Neil Ferguson and Imperial College London colleagues which warned of hundreds of thousands of deaths if no restrictions were put in place.

The team found that while a strict response from authorities was “highly effective” in reducing demand for intensive care unit (ICU) beds, when rules are rolled back millions remain susceptible to infection while a large proportion are still suffering from the disease.

They wrote: “This then leads to a second wave of infections that can result in more deaths, but later.”

The UK has the highest death toll in Europe and the deepest recession of any leading nation.

The country’s dreaded second wave is fast picking up speed as winter approaches, with more than 14,000 new cases reported since Tuesday.

Areas in the North of England, including Manchester, are facing tough new restrictions (Image: GETTY)

A prediction that jobless numbers in Northern Ireland will rise to 100,000 by the end of the year now looks like an optimistic forecast, the economy minister has warned.

Mrs Dodds also expressed concern that the Stormont executive’s message around the need to comply with COVID-19 rules and guidance was “not cutting through” and that “complacency” had set in among some people.

The minister said modelling carried out by her department in the summer forecasting a 100,000 claimant count by the end of 2020 was based on a premise of no new restrictions being introduced.

2.08pm update: Andy Burnham says Government has not consulted leaders in the North

Greater Manchester metro mayor Andy Burnham has hit out at the way the Government is bringing in its latest coronavirus restrictions, insisting there was not enough consultation with local leaders, telling the BBC: “What they are doing is imposing rather than negotiating.

“And there is a very big difference between those two things when we know millions of people’s lives will be affected by these things.”

Dr Helen Stokes-Lampard, chair of the Royal College of General Practitioners, has warned the south of England could be hit hard by the nation’s second wave of coronavirus.

She said: “I’m based in the Midlands and we are seeing problems in Birmingham, but we are also seeing issues in Coventry, Nottingham, and it’s working further south.

“We are also seeing some interesting patterns starting to happen in London again.

“So yes this is a problem actually affecting all four nations of the UK.”

Speaking on a visit to Wiltshire, Labour leader Sir Keir Starmer said his party would not be voting down the Covid-19 restrictions in the Commons next week,

He said: “There is growing concern about the 10pm curfew and lots of examples of everybody coming out of venues at the same time.

“We need this reform but there is a smarter way of doing this. In Wales they have got a different set up which is working much, much better.

The Prime Minister is expected to unveil a three tier system of lockdowns in England.

Under the proposals, people living in areas in the third and strictest tier are expected to be ordered not to have any contact with people outside their home.

A person familiar with the plan told Sky News businesses in areas placed in the third tier will be offered financial support as they are forced to shutter.

Boris Johnson is expected to announce a shutdown of hospitality venues in parts of the North (Image: GETTY)

A total of 51,475 new people tested positive for COVID-19 in England in the week to September 30, according to the latest Test and Trace figures.

This is an increase of 56 percent in positive cases on the previous week and is the highest weekly number since Test and Trace was launched at the end of May.

Up to 100 students staying at a campus part of the University of East Anglia in Norwich have gone into self-isolation following an outbreak of coronavirus.

Forty-three positive tests have been confirmed.

The university said it is following government guidelines on households isolating.

10.39am update: COVID care home deaths double that of flu and pneumonia

In care homes the proportion of coronavirus deaths in the first eight months of the year was almost double those caused by pneumonia and flu.

Thirty percent of people who died in care homes in England and Wales had tested positive for COVID-19.

This compares to 15.2 percent who died having been diagnosed with flu or pneumonia.

The highest number of deaths due to flu and pneumonia occurrred in January.

But it is worth noting that these deaths were below the five-year average in every month from January to August.

10.33am update: Three times as many COVID deaths than pneumonia and flu combined

Coronavirus has killed three times as many people as the flu and pneumonia combined, official figures show.

Data released by the Office for National Statistics (ONS) showed there were 48,168 deaths in the first eight months of the year where COVID-19 was a factor.

The statistics related to deaths which occurred in England and Wales between January and August.

The ONS said: “While flu and pneumonia were mentioned on more death certificates, COVID-19 was the underlying cause in more than three times as many deaths.”

Multiple vaccination sites are set to spring up across the UK as the NHS prepares to vaccinate tens of thousands of people daily by Christmas.

The first of the coronavirus jab centres is expected to open next month, with five up and running by the time the festive season rolls in.

According to leaked documents, London will host a major site as will the northern cities of Leeds and Hull, where a second wave of the killer virus is spreading fast.

The health service will have trainee nurses, physios and paramedics at each vaccination centre which will have the capacity to administer the jab to tens of thousands of people each day, reports.

NHS bosses are banking on two potential vaccines being ready this winter.

People in high-risk groups will not have to travel to get injected and will instead be offered a mobile service.

Mass distribution of a coronavirus vaccine is set to begin this winter, a leaked report says (Image: GETTY)

The number of cases reported on Thursday was “more than 1,200”, Austrian newspaper Kronen Zeitung said.

8.28am update: Minister says there is evidence pubs ‘play a role’ in spreading coronavirus

Housing Minister Robert Jenrick has claimed pubs and restaurants are playing a role in the spreading of COVID-19.

Asked if the hospitality sector is increasingly part of the problem with infection rates, Mr Jenrick told BBC Radio 4’s Today programme: “There is evidence that it plays a role.

“It is commonsensical that, with a virus that’s transmitted through human contact, the longer one spends with individuals in indoor settings, in a pub or a restaurant, the more likely it is that we spread the virus.”

Asked if the Government would publish scientific evidence regarding the spread of COVID-19 in the hospitality sector, he said: “It is commonsensical that the longer you stay in pubs and restaurants, the more likely you are to come into contact with other individuals.

“The more drinks that people have, the more likely that some people are to break the rules.

“There is evidence guided by the Chief Medical Officer and the Chief Scientific Officer.

“I think it is right that we take action decisively, rather than waiting for the most detailed epidemiological evidence to emerge.”

7.58am update: PM blasted for failing to brief authorities in North about shutdown

Boris Johnson has been urged to “get a grip” on the coronavirus pandemic ahead of his expected announcement of new restrictions for the North.

Labour Mayor of the Sheffield City Region and MP Dan Jarvis hit out at the leaked reports of the Prime Minister’s new rules.

Mr Jarvis said it was “recklessly irresponsible” of the Prime Minister “to brief the papers but not leaders in the North who’ll somehow have to make this work”.

He added: “Get a grip @BorisJohnson.”

7.53am update: Tens of thousands of jobs in Scotland will be lost, warns hospitality boss

UKHospitality executive director for Scotland Willie Macleod has warned that many businesses won’t survive the new restrictions on hospitality and licensed trade in Scotland and said that tens of thousands of jobs will be lost.

He told BBC Breakfast: “The hospitality, the licensed trade fully appreciates the health position and we realise the Government has very difficult decisions to make to balance public health and the economy but the impact on businesses that have worked very hard and successfully to provide safe hygienic environments for customers and staff, the impact is going to be horrific.

“It’s coming at a very difficult time of year. There’s never an easy time of year, but we’re reliant on tourism as well as local customers, we’re just going into the mid term holiday period and customers in Scotland and elsewhere are absolutely uncertain now about whether to continue with their holiday bookings.

“Closing bars and restaurants is going to have a massive impact on businesses that are really just climbing back from a prolonged period of lockdown, they’ve reopened with reduced capacity to cope with social distancing, they were then hit by the 10pm curfew and with reduced demand and reduced consumer confidence business resilience is as low as it can be.

“Many businesses won’t survive and I’m afraid we’re going to see tens of thousands of job losses by the time we do the final count on all of this.”