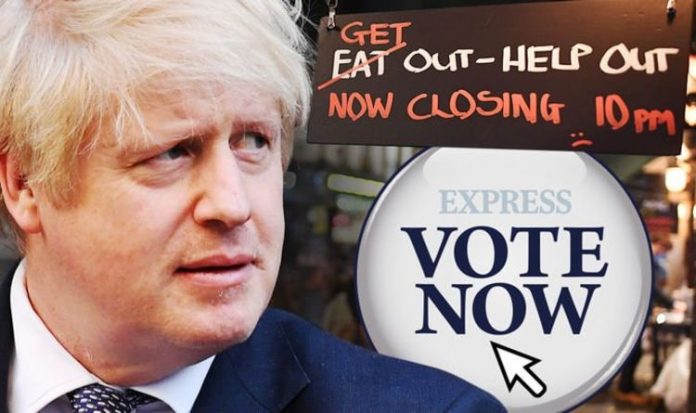 Downing Street has defended the measure but officials were unable to highlight any specific scientific evidence of its effectiveness.  A vote on the controversial policy – which could see a Tory revolt – is expected to be held in the House of Commons next week.

The Prime Minister’s official spokesman said: “The curfew was brought forward as part of a package of measures – which should be viewed as just that – and which we believe that, collectively, should have an impact on helping to slow the spread of the virus.”

Labour leader Sir Keir Starmer said people were “screaming out” to know the evidence behind the move and called the lack of explanation for the Government’s restrictions “ridiculous”.

He continued: “The Prime Minister knows that there are deeply held views across the country in different ways on this.

“One question is now screaming out: is there a scientific basis for the 10pm rule?”

Mr Johnson replied: “The basis on which we set out the curtailment of hospitality was the basis on which he accepted it two weeks ago – that is to reduce the spread of the virus and that is our objective.”

The Labour leader was pressed by Mr Johnson on whether he supported the Government’s rule of six policy after his party abstained during Tuesday’s vote on the matter.

The Prime Minister accused Sir Keir of showing “no leadership”, adding: “He cannot continue to have it both ways. Does he support the rule of six? Yes or no?”

Sir Keir said he did support the rule, but that there is a “lack of clarity” about why particular restrictions have been introduced.

During the intense clash in the Commons, Mr Johnson said: “I wish I could pretend that everything was going to be rosy in the Midlands or indeed in London where, alas, we are also seeing infections rise.

“That is why we need a concerted national effort, we need to follow the guidance, we need hands, face, space, get a test if you have symptoms, and obey the rule of six.”

Earlier, Chancellor Rishi Sunak defended the Government’s controversial 10pm coronavirus curfew for pubs and restaurants and warned the alternative was for them to close altogether.

In a clear message to potential Tory rebels, Mr Sunak indicated the alternative to the existing restrictions would be even tighter controls.

He said: “The curfew was something we were told by our advisers could well make a difference to the spread of the transmission.

“In common with many other countries around the world, this is thought to be something that can help suppress the spread of the virus.

“We are not an outlier in having a curfew.

“As a tool, we have at our disposal to try and suppress the spread of the virus, it is one that is advised across the board can make a difference.

“What I would say is it is better than having places closed.”