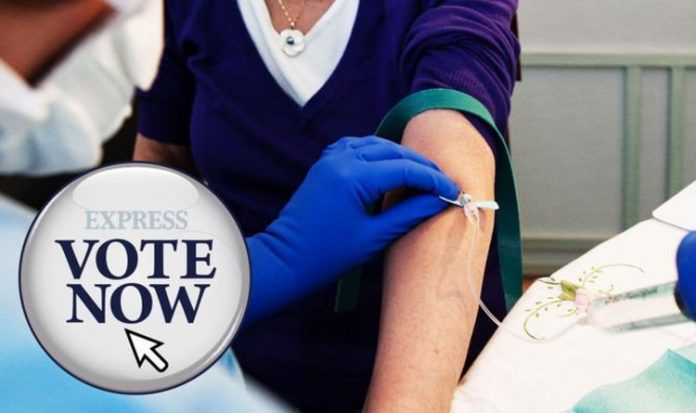 Several pharmaceutical companies have now produced a vaccine with more than a 90 percent efficacy rate. Frontrunners Pfizer and BioNTech submitted their vaccine for approval to the US Food and Drug Administration last week. The company has said they are ready to administer the jab within 24 hours of getting the go-ahead, sparking hopes the end of the coronavirus crisis in sight.

The UK regulator, the Medicines and Healthcare products Regulatory Agency (MHRA), is poised to fast-track authorisation of Pfizer’s vaccine.

The UK has secured enough doses of the jab to vaccinate 20 million people, with 10 million due in the country by the end of the year if the jab is approved.

Health Secretary Matt Hancock has said the NHS could start rolling out immunisations next month, if the MHRA approach the drug.

He said: “We hope to be able to start vaccinating next month. The bulk of the vaccine rollout programme will be in January, February, March.

“And we hope that sometime after Easter things will be able to start to get back to normal.”

Some commentators have called for the UK’s lockdown to end as soon as those most vulnerable to the virus, such as the elderly, have been inoculated.

Former Brexit Party MEP Daniel Hannan wrote on Twitter: “Surely once the vaccine has been made available to vulnerable people and healthcare and care home workers, things can reopen.

“There is no need to cover the general population.

“The argument used to be that we couldn’t selectively protect at-risk groups. Well, now we can. No?”

JUST IN: Oxford vaccine could be first in WORLD to be rolled out – here’s why

Dr Moncef Slaoui, the head of the White House’s coronavirus vaccine effort, said about 70 percent of the population needs to be immunised to achieve herd immunity and this would be possible by May.

A study published in leading medical journey the Lancet on November 4, estimates between 60-72 percent of the population needs to be inoculated for herd immunity to be achieved.

This morning Oxford University announced its coronavirus vaccine was up to 90 percent effective at stopping the virus in clinical trials.

The Government already has 4million doses of the Oxford jab, made with support from pharmaceutical giant AstraZeneca, which are ready to be administered as soon as the drug has been approved.

The UK has also ordered an additional 100million doses of the vaccine.

A third firm, Moderna, has also announced its vaccine has been found to be almost 95 percent effective.

The UK has ordered 5million doses of this jab.

The Government has outlined its provisional ranking of prioritisation for people to receive the vaccine.

Care home residents and workers will be the first, followed by those aged over 80 and health and social care workers.