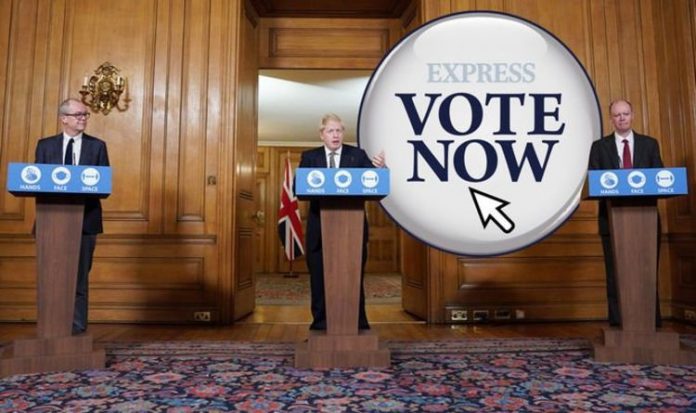 Cabinet sources said the data presented to the Prime Minister before the current lockdown was a worst-case scenario and not realistic. Prior to the second lockdown, which is due to be lifted on December 2, experts warned the PM deaths could rise to as many as 4,000-day. Scientists also said England could suffer worse figures than had been seen during the peak of the pandemic in March.

With this in mind, Express.co.uk is asking readers today: “Should lockdown be lifted EARLY after the Prime Minister was pressured by ‘worst-case’ data?

One Government minister told the Daily Mail Mr Johnson may have been “bounced” into making the decision.

They said: “I think he is concerned that he may have been bounced into it.

“He was really, really cross about the leak because at that point a different decision might still have been made.

“There is also concern that some of the information used to inform the decision now seems to be crumbling.

“In fact, the figures seem to be suggesting things were getting better before the lockdown began – we are being shut down for a month when we did not need to be.”

During a Science and Technology Select Committee last week, Sir Patrick and Professor Whitty’s were accused of frightening the wider population.

King’s College London’s ZOE application has tracked symptoms and test results since the first wave and has shown a slight fall in new cases.

Carl Heneghan, director of the Centre for Evidence-Based Medicine at the University of Oxford, stated forecasting 4,00 daily deaths was incorrect.

He told the Today programme: “Mathematically it is now proven to be incorrect, particularly the 4,000 estimate of deaths that would occur in December and why that is because it is already about four weeks out of date.

“And actually Cambridge, who are doing it the MRC (Medical Research Council) unit, have already provided updates to provide lower estimates and those estimates are much closer to the truth.”

As of Sunday, cases across the country have dropped by 2.5 percent over the last seven days.

Although the data shows an increase of 20,572 cases, Government data shows cases are levelling off across the country.

Indeed, in areas which had been put under Tier 3 restrictions before the national lockdown, such as Liverpool, cases have fallen dramatically after reaching a peak of 584 on October 7.

As of November 6, cases in Liverpool had fallen to 140, suggesting the worst of the virus had passed.