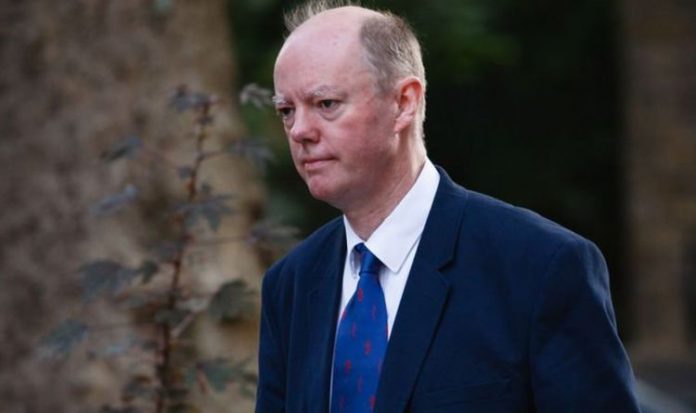 The government’s Chief Medical Officer said England could then go into a new regional tiering system once the countrywide restrictions, which kick-in from tomorrow (Thurs), come to an end on December 2.

Scientific and medical experts are currently working on a special system that would help people “maximise” their festive celebrations without increasing transmission of the disease, he said.

The optimistic outlook comes as it emerged that GPs are to be put on standby in case of a potential Covid-19 vaccine rollout beginning in December.

Family doctors are going to be told to be prepared to start vaccinating over-85s and frontline workers from early next month, according to GPs magazine Pulse.

However, a widespread roll-out of vaccines is not expected to begin until the Spring.

“If people adhere in the way that I expect they will, it’ll reduce R below 1, in my view, in the great majority or all of the country,” he told the House of Commons Science and Technology Committee.

“I wouldn’t want to imply that suddenly that means that Covid is over as a problem.

Chris Whitty is confident the month-long shutdown will do what it’s supposed to do (Image: Getty )

“I think that the aim of this is to get the rates down far enough that it’s a realistic possibility to move into a different state of state of play at that point in time.”

Mr Whitty said that plans are already underway to introduce a new tiering system for December that would help people celebrate during the Christmas period.

“We’ll have to work out ways we can advise people in a way that maximises their ability to keep with the essence of what is the festivity but minimises the risk of transmission and we are trying to work that through at the moment,” he said.

“But how risky that will be, how far that road we can go down, will very much depend on the epidemiology.

Professor Whitty and the government’s chief scientific adviser Sir Patrick Vallance, also admitted the localised, three-tier lockdown approach – only introduced on October 14 – was starting to drive down the R rate and slow the spread of infections, particularly in northern hotspots which had been subjected to ‘Tier Three’ restrictions.

But Professor Whitty claimed the measures were not working fast enough to counteract a mid-September surge in infections which has triggered a wave of hospitalisations that modellers believe will breach national hospital capacity by November 20.

He said: “It is difficult to be absolutely confident about how far their effect [the tiered system] has gone. I am confident Tier Two has had an effect and that Tier Three has had a bigger effect. I am confident of that.

“The communities in the North and Midlands in particular, obviously London too has went into a Tier Two and some parts of eastern England too, have responded remarkably to this. And because of that, I am confident the rates are substantially lower than they would’ve been if this had not happened.

“But the early indications we have at the present is that this has not achieved getting the R below one – it has brought it much closer to one – but it is still doubling over a longer period of time.”

New data from the Covid Symptom Tracker app, which is run by King’s College London (KCL), suggests there has been a slight drop in new Covid-19 infections across England, Wales and Scotland.

Professor Tim Spector, who leads the app study, said: “More good news as the Zoe CSS app survey continues to show a plateauing and slight fall in new cases in England, Wales and Scotland with an R of 1.0.”

R, which stands for reproduction number, represents the average number of people each Covid-19 positive person goes on to infect.

When the figure is above 1, an outbreak can grow exponentially, but if it goes below 1, it means the outbreak is shrinking.

The data from KCL’s symptom tracker app appears to differ from the figures published last Friday by the Government Office for Science and the Scientific Advisory Group for Emergencies (Sage), which estimates R to be between 1.1 and 1.3.

The figure is slightly lower than Sage’s official estimate from the previous week, which stood at between 1.2 and 1.4.

A Government adviser said that while the R number appears to be falling, it is still above 1 – which means “we are still looking at a growing epidemic”.