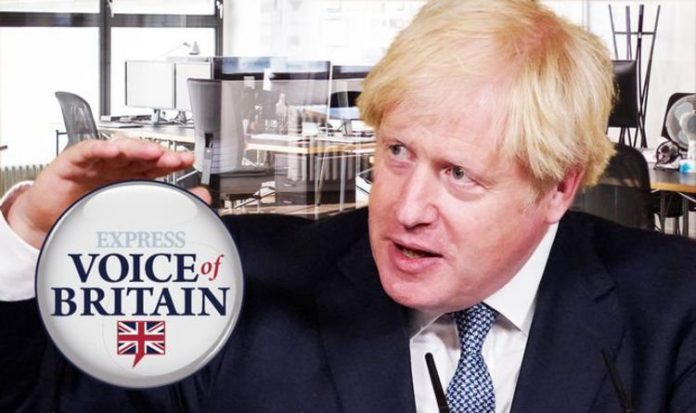 Mr Johnson announced the lockdown on March 23 forcing people to stay in their homes for seven weeks in order to control the deadly virus, and stop the NHS from being overwhelmed. With restrictions largely lifted, the Prime Minister has warned strict rules may be reintroduced if the number of cases begins to rise rapidly. In light of Mr Johnson’s concerns, Express.co.uk asked: “Would you support second mass lockdown in bid to stop second wave?”

In contrast, 1,389 (41 percent) voted insisting they would support a second lockdown while just 39 (one percent) were not sure.

Responding to the poll, one person insisted the country would not support a second lockdown after experiencing the first.

They said: “If they think the country will swallow that rubbish again they’re in for a shock. No, No, No.”

Another expressed their fear over how a second lockdown would hit the economy.

They said: “So they didn’t manage to completely wreck the economy last time and would like a second bite at the cherry?

“I worked throughout the last lockdown without so much as a sniffle and I will no doubt do the same if there is another!

“This virus is not to be feared unless you have a weak immune system and comorbidities.”

Due to the lockdown across the country, the UK has suffered severe economic consequences.

In data from the Office for National Statistics, 730,000 jobs have been lost since March.

The loss of jobs between May and June has been the largest since 2009 after the financial crash.

Although the Bank of England announced last week the UK’s economic downturn may not be as bad first feared, Britain’s GDP is still expected to drop by 9.5 percent this year.

Initially, there had been hopes of a V-shape after the virus.

However, the Bank now expects the economy to not fully recover until the end of 2021.

Philip Shaw, chief economist at Investec Bank, said: “We are forecasting a monthly increase of 8.1 percent as more of the economy, such as ‘non-essential’ retailing, opened up in mid-June.

“July’s figures next month should contribute strongly to a material rebound in the third quarter, but the test will come in the autumn when there are no further ‘lockdown releases’ to boost the economy, some restrictions perhaps just local are imposed and programmes such as the furlough scheme are wound up.”