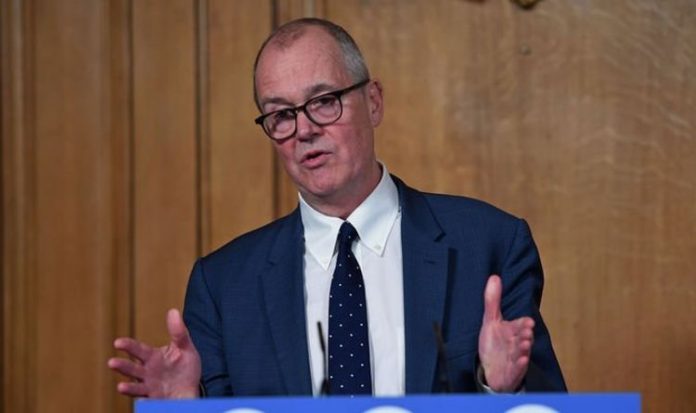 The Chief Scientific Adviser to the Government sounded the alarm during a Downing Street press conference yesterday. It comes as Prime Minister Boris Johnson faces heavy opposition to the proposed application of the measures to Manchester from mayor Andy Burnham. Recorded coronavirus cases in the UK have surged past spring levels in recent weeks, with the Prime Minister introducing the tier system to get on top of the country’s spiralling pandemic.

Sir Vallance has said the “baseline” measures set out in tier three were “almost certainly not enough” to get the R-rate below 1.

He added: “It is crucial that where the R is above 1 and the numbers are high we get the R below 1 for all the reasons that have been outlined, including of course the hospitalisations which are increasing.

“It is crucial that is done and there are a number of ways that it can be done.

The UK’s rate of infection, or R rate, has climbed higher yesterday to between 1.3 to 1.5.

Current guidelines say areas under tier three restrictions must close all pubs and bars and ban all indoor household mixing.

Liverpool was the first region in the UK to go into third tier restrictions, with the new rules coming into effect on Tuesday.

Lancashire agreed to join Liverpool yesterday but has allowed gyms to remain open.

READ  From Arab headdresses to the aerospace industry, the thread of history links us to the Middle East

Greater Manchester has been recommended to enter tier three restrictions as the region has one of the highest rates of infection in the country, with Foreign Minister Dominic Raab claiming the area has 470 cases per 100,000 people.

But Mr Burnham has threatened to take legal action against the Government if tier three restrictions are applied.

He said: “We are law abiding people, we would respect the law of the land.

“But we would consider other routes, legal routes, where we could protect our many thousands of residents who are going to be left in severe hardship in the run up to Christmas.

“We would not just leave them in the lurch, we would try and support them and that would include any legal action we could take on their behalf.”

Coronavirus cases yesterday surged by another 15,635 according to Government data.