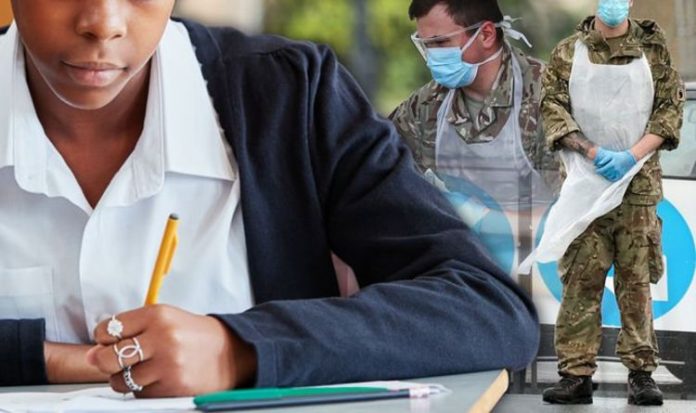 Three schools were chosen for a trial of the mass antigen test scheme which rapidly detects whether a person currently has COVID-19. Up to 1,500 students at schools in Lewisham, south London, Poole and Salisbury will take part in the initiative over three days.

Ninety army medics were sent to classrooms to put the trial plan into action, freeing up NHS medics ahead of an expected winter onslaught of coronavirus and seasonal flu.

They will spend three days carrying out the pilot before packing up on Friday.

The antigen test being used takes about half an hour for results to be returned to students, The Times reports.

For students aged 11 to 16 parental consent is required for the test.

Older students are free to opt in or out of the test without permission from their parents.

Teachers will also be invited to get tested for the virus, which has infected 789,229 people in the UK.

The aim of the trial is to help bosses at Public Health England examine the effectiveness of rapid antigen tests for the Government’s mass testing programme.

READ MORE: UK to undertake half a million tests a DAY to stop winter crisis

The Government has come under fire for its lack of support for restaurants and pubs hit hard by the middle tier of measures, which bans people from different households from mixing indoors.

Watering holes in current Tier 2 areas such as London and Birmingham have experienced a significant drop in numbers since the rules were rolled out.

Rishi Sunak will unveil a new plan to help firms, particularly pubs and restaurants, who have been hit hard by the social restrictions in the “high” COVID-19 category.

Mr Sunak is expected to make a statement to the Commons on Thursday morning laying out his plan.

Reports suggest his plan comes on the back of complaints from industry leaders and MPs that thousands of jobs were at risk ahead of Christmas.

The Chancellor’s spokesperson said: “The Chancellor is due to update the House of Commons on the economic situation, in particular, and so far as it relates to the new restrictions.

“And, what we have always said is that our package of support is always flexible and always up for review to make sure that it is dealing with the situation as it evolves.”

In Tier 3, social mixing is banned both indoors and in private gardens.

Pubs and bars must close unless they can operate as a restaurant.