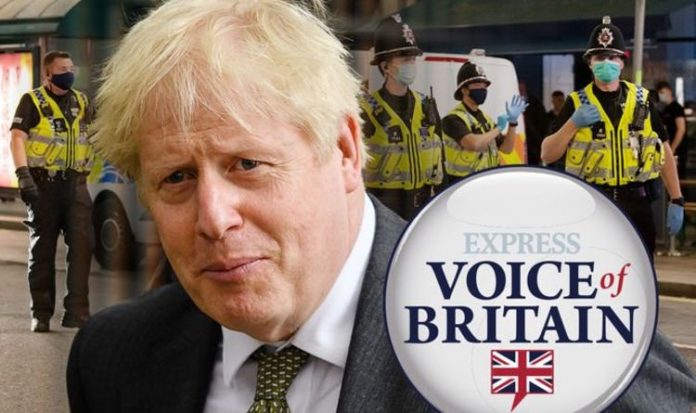 Coronavirus infections are continuing to soar in the UK, prompting Boris Johnson to introduce a number of strict new measures, such as the rule of six and a 10pm pub and restaurant curfew in a bid to curb the spread of the deadly virus. But a recent poll has found a number of people in areas across the UK are not following the new rules.

The poll, carried out from 11am on Thursday October 1 to 12pm on Friday October 2, asked: “Are people in your area following the Government COVID-19 rules?”

The majority of the 1,624 respondents indicated that their neighbours were not adhering to the coronavirus guidelines, with 56 percent (878 people) voting “no”.

Readers then took to the comments to explain why they voted a particular way, with many stating people are failing to adhere to current guidelines, especially regarding face coverings.

One person wrote: “Still gangs of teenagers still hanging around the shopping squares and certain pubs and restaurants are doing the absolute minimum to follow the rules.

“People are still wandering around supermarkets not masked up properly, as once they get passed the door security down comes the mask – seen it today in Tesco.”

A second person responded directly to the poll question, and said: “”Of course the people in many regions are not following the guidelines – that’s why it’s still spreading.

“Most shoppers were either not wearing masks or had their noses or mouths exposed.

“Many I observed didn’t bother with hand sanitiser.

“No wonder we’re in lockdown.”

Another reader condemned the current measures, particularly concerning sport, as a “farce”.

They wrote: “As long as twenty two people can hug sweat and sweat all over each other playing football and go home to their families to spread the virus then the rule of six and social distancing is a farce.”

One person suggested the Prime Minister needed to change the guidance, and make them easier for people to understand.

They said: “Young people are a law to themselves – the question I would ask Boris is ‘are you presenting enough sensible alternatives’ for them?”

Another person agreed and said: “How are we supposed to know what the rules are when they keep changing them every 5 mins?”