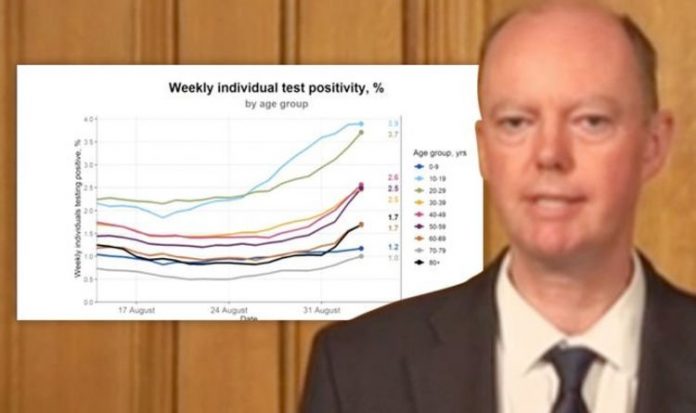 Chief Medical Officer Chris Whitty has issued a stark warning for Britons under 30-years-old as the UK’s coronavirus cases begin to climb again.

Prime Minister Boris Johnson was leading a briefing with his medical and scientific advisers after 2,659 new coronavirus cases reported in the country today.

Mr Whitty showed a series of graphs that pointed to a spike in infections for younger people, and compared Britain’s trajectory to Belgium, France and Spain.

In the comparison graph with other European countries, the expert said: “We’re following a pattern extremely similar to what France followed.

“In France, that rate has continued to go up and the same is true in Spain.

“In Belgium, the same sort of graph was happening but then they took decisive action and at that point the rate stabilised and began to come down.

READ  Prime Minister's statement to the House of Commons on COVID-19 regulations: 6 January 2021

“So this is a clear indication that if you act rapidly then there is a good chance of bringing the rates back down under control.”