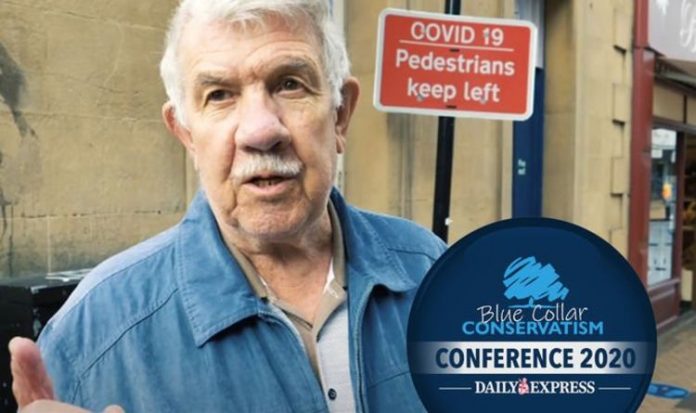 Speaking as part of the Blue Collar Conservatism Conference 2020 Jeff, 82, from Mansfield, erupted at the cost of rent for high street stores as many have closed down due to Covid-19. He insisted that only young people shop online but in his town, people rely on the high street. He said: “The rent is too high for most of the people who rent the shops that’s why they’re closing down.

“Online is okay if they’re all youngsters who live in that place.

“You look around here, how many youngsters do you see? Not very many.

“In these areas, it’s mostly middle-aged and elderly people around Mansfield and not many are online.

“I’ve never been online. My son wanted to get me a computer and everything else and I said, ‘at 82 years old what would I do online?'”

READ MORE: Second wave UK: Are we in a second wave?

The Blue Collar Conservatism Conference 2020, launched this week, is an event designed to listen to the views of grassroots voters in new Conservative seats across the UK.

Founded by Esther McVey in association with the Daily Express, the conference comes after a political revolution spearheaded by Boris Johnson saw the Conservative Party win an unprecedented number of seats from former Labour heartlands in the 2019 general election.

All week Express journalists will travel up and down the country with Ms McVey’s team to hear what real people think of the key issues impacting their lives.

It comes as bans on loud music, singing and dancing have been imposed as part of new emergency coronavirus rules, as well as hefty fines for knowingly ignoring orders to self-isolate.

Wide-ranging laws and the list of punishments were revealed in legal documents and came into force on Monday.

Now, by law, people in England must self-isolate if they test positive for coronavirus, or are contacted by the test and trace service, or face fines starting from £1,000, rising to £10,000 for repeat offenders.

Those who test positive must do so for 10 days after displaying symptoms, or from their test date if they are asymptomatic, while members of their household must isolate for 14 days.

Meanwhile it emerged that separate laws, which also came into force on Monday, ban pubs, bars, restaurants and cafes from playing music which exceeds 85 decibels, although live performances are exempt.

The same rules also say that pub landlords or those who run other venues like hotel bars, restaurants and members clubs, must take “all reasonable measures” to stop singing on the premises by customers in groups of more than six, and dancing.

Wedding ceremonies and receptions are exempt from the rule.

The self-isolation rules show there is a £4,000 first-time fine for those who are “reckless” by coming into contact with others when they know they should be self-isolating.