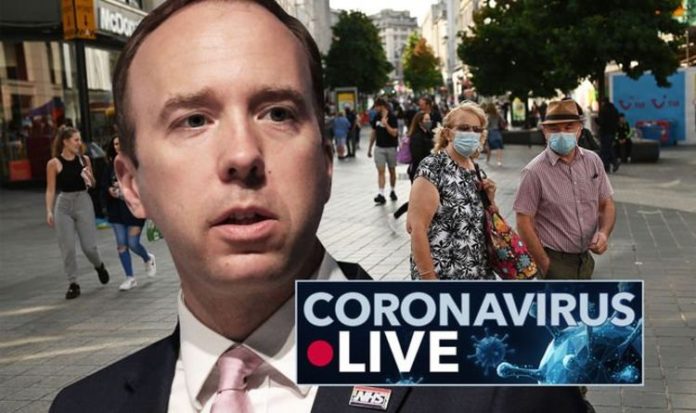 Leaders in Manchester, Liverpool, Newcastle and Leeds have united to tell Health Secretary Matt Hancock that they would not support further “economic lockdowns” and called for new powers to tackle the resurgence. The calls came as the UK-wide seven-day rate increased to 125.7 COVID-19 cases per 100,000 people from 63.8 a week ago.

In a joint letter to Mr Hancock, the leaders of Leeds, Manchester and Newcastle city councils – Judith Blake, Sir Richard Leese and Nick Forbes – joined Liverpool mayor Joe Anderson to say they are “extremely concerned” with the rise in cases.

The Labour politicians wrote: “The existing restrictions are not working, confusing for the public and some, like the 10pm rule, are counter-productive.”

They also called for additional powers to punish those who break rules, for new restrictions to be developed by police, council and public health experts and for a locally-controlled test and trace system.

“We want to be clear however that we do not support further economic lockdowns.”

Professor Edmunds, who sits on the scientific advisory group for emergencies (Sage), also agreed local measures had failed and said more stringent lockdown restrictions are needed to bring the pandemic under control.

He added: “These local restrictions that have been put in place in much of the north of England really haven’t been very effective.”

“We need to take much more stringent measures, not just in the north of England, we need to do it countrywide, and bring the epidemic back under control.”

He said the Government’s current “light touch” measures are just “delaying the inevitable”.

“We will at some point put very stringent measures in place because we will have to when hospitals start to really fill up.

“Frankly, the better strategy is to put them in place now.”

The 10pm closure rule for pubs and restaurants has been criticised across the political spectrum, and the Government is braced for a potential rebellion from backbench Conservatives if it goes to a Commons vote.

Twelve Tories rebelled against Prime Minister Boris Johnson on Tuesday when they voted against England’s “rule of six” on Tuesday.

8am update: University return to Online Learning over COVID-19 chaos

The restart of Britain’s education sector has been dealt a severe blow after three of the country’s largest universities shifted to online classes due to coronavirus outbreaks.

More than 50 universities in the UK have confirmed cases of COVID-19, after thousands of undergraduates returned to campus for the start of the autumn term.

Manchester University, where there have been 382 coronavirus cases since September 21, joined with Manchester Metropolitan University and the University of Sheffield in announcing a move to online learning to protect the health of students and staff.

The Manchester universities said they had made the decision together in consultation with the area’s director of public health, supported by Public Health England.