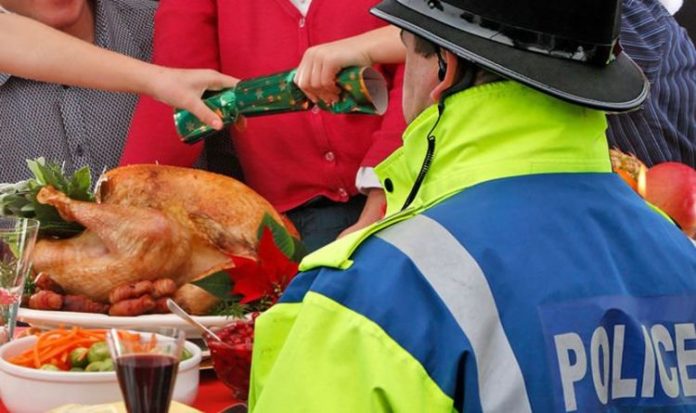 Millions of people across England are facing a festive season unlike any other, as current coronavirus restrictions across swathes of the country mean indoor gatherings between two households are no longer permitted.

And as Sage scientists push the Government to impose a second national lockdown, many people are set for a lonely Christmas while cut off from their loved ones.

West Midlands police and crime commissioner David Jamieson said officers would enforce COVID restrictions over the holiday season, even if it meant breaking up celebrations in private homes.

He told The Telegraph: “If we think there are large groups of people gathering where they shouldn’t be, then the police will have to intervene.

“If, again, there’s a flagrant breaking of the rules, then the police would have to enforce.

“It’s not the police’s job to stop people enjoying their Christmas.

Police in England will break up illegal family gatherings this Christmas (Image: GETTY)

Millions more are living under Tier 3 restrictions, with pubs banned from serving alcohol unless it is with a meal, a rule which has caused hundreds of bars to shut.

The strict measures are set to bring unprecedented hardship to families this Christmas, as elderly people will not be allowed to meet with their children, grandchildren and extended family if they live separately.

Many people are set for a lonely Christmas due to COVID restrictions (Image: GETTY)

Mr Jamieson warning against large gatherings over the holidays came was seconded by Jane Kennedy, the PCC in Merseyside.

The area is part of Liverpool City Region which earlier this month had Tier 3 restrictions slapped on with a £44 million support package for workers and businesses.

It is Boris Johnson’s “ambition” for people to be able to celebrate Christmas with their families, his spokesman said last week.

But with the number of coronavirus cases rising rapidly every day, and Tuesday’ death toll reaching a five-month high, it is looking ever more doubtful that the Prime Minister’s wish will come true.

Boris Johnson has been urged by Sage experts to impose a second national lockdown (Image: GETTY)

Families across the country are in for a Christmas unlike any other (Image: GETTY)

Mr Jamieson warned the end of the furlough support scheme for workers could spark street riots.

The Government’s scheme, which will come to a close on Saturday, will be replaced by a less-generous Job Support Scheme (JSS).

He said the West Midlands, one of the UK’s coronavirus hotspot regions, could be set for widespread civil unrest as people would “very likely” be tipped over the edge by the stripping of financial support.

He warned of an impending “considerable explosion of frustration and energy” over the coming weeks.

The PCC added: “Things are very on the edge in a lot of communities and it wouldn’t take very much to spark off unrest, riots, damage.”

His warning comes as Environment Secretary George Eustice said on Wednesday that a coronavirus vaccine could be on the market by Christmas.

He told Sky News it is likely that the first COVID-19 vaccines will be imperfect.

He said: “A vaccine will be the answer at some point, but it is too early to say precisely when that vaccine will come.

“I know there’s some hope that there might be something as quickly as Christmas, but that’s not by any means a certainty.

“Always with a vaccine, you don’t know precisely what level of protection it will deliver. There’s always a lot of doubt and uncertainty with vaccines.”